How thin is "extremely thin"? 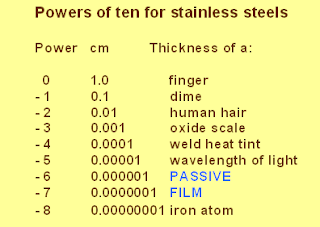 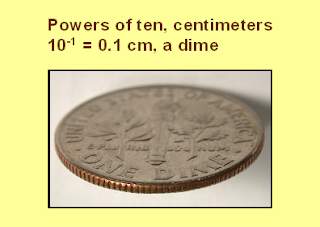 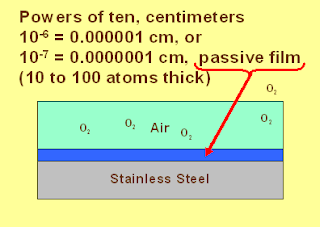 Explaining how big or small unfamiliar things are can be a challenge. Last July on his blog, Can You Hear Me Up the Back?, Ian Whitworth discussed the Top 10 Presentation Measurement Units. For big things there are some familiar reference objects, like football fields, the equator, or a trip to the moon. For small things there just is the thickness of a human hair.

On January 9, 2010 I spoke for 45 minutes at the 45th SIEO/NACE Sun Valley Symposium. My presentation was “An Introduction to Stainless Steels and Corrosion.” Most of my audience was not familiar with stainless steels or metallurgy. They were very familiar with steel pipelines, organic coatings, cathodic protection, and repair methods.

How do stainless steels work? They are reactive metals – iron alloys containing at least 11% chromium. The surface of a stainless steel reacts with oxygen to form an extremely thin, self-healing, chromium-rich passive film which stops further corrosion. This process is called passivation, and the film is just 10 to 100 atoms thick. Stainless steels are some of the first “smart” materials, although they were invented almost a century ago. You probably have them in your kitchen as cutlery, mixing bowls, and perhaps pots or pans.

If you understand how thin the film is, then you can understand that the surface must be processed meticulously to remove contaminants from fabrication. Just rubbing the surface with a steel wire brush or steel wool can embed enough free iron to interfere with passivation. Typically free iron is removed by immersing the product in a solution of nitric or citric acid, which confusingly also is called passivation. Thicker contaminants like heat tint from welding are removed by a more aggressive treatment called pickling, which uses a solution with nitric acid plus hydrofluoric acid.

My use of powers of ten to illustrate thicknesses was inspired by the 1977 Charles and Ray Eames movie Powers of 10.
Posted by Richard I. Garber at 6:52 AM