Did Idaho ‘move to the left’ based on results of our recent election for governor? 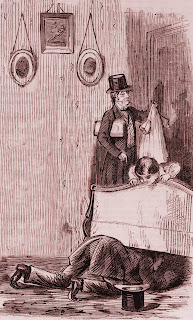 No – that’s just paranoia. To me it seems you had to be looking for a leftist under every bed, as portrayed above via the revision of a vintage cartoon. But it’s what Bob Neugebauer decided we did in an article published in his Gem State Patriot News on November 13, 2022 titled Will Idaho continue to move “Left”? I don’t think so. I suspect he’d read another article on November 11, 2022 titled Summary of the Ammon Bundy for Governor Campaign which whined:

“Throughout the campaign we could see the great challenges all Idahoans face when it comes to stopping Idaho’s slide into leftist liberalism.”

Our incumbent, Brad Little [Republican] got 60.5% of the vote, while Stephen Heidt [Democrat] got 20.3% and Ammon Bundy [Independent] got just 17.2% - a poor third place showing. Bob’s LinkedIn profile says he got to Idaho in January of 2001, so he was here for the 2002 election for governor. 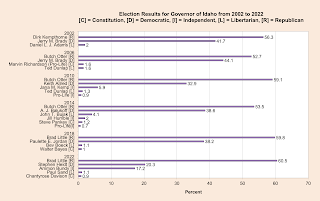 Bob waved his hands about the numbers of registered voters, and said:

“It is clear to us that many democrats but even more unaffiliated registered voters cast their vote for Little as they realize the democratic candidate never had a chance and Little is the closest thing to a democrat that they were going to get.”

Still another article from the Bundy Campaign on November 7, 2022 titled Splitting the vote narrative is laughable listed the numbers of registered voters shown above in a second bar chart. It looks to me like ALL the Republicans voted for Little, ALL the Democrats voted for Heidt, and the Independents split between Heidt and Bundy (except just about 3% who went for Little). There is a big problem in using the registration numbers, since the Republicans run a closed primary election. Independents and Democrats don’t get to vote then.

Posted by Richard I. Garber at 1:48 PM No comments:

How business writing could be improved, based on results from a 2016 survey 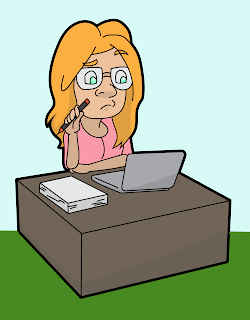 I saw an interesting article by Josh Bernoff in the Harvard Business Review on September 28, 2016 titled Your writing isn’t as good as you think it is. It discusses a survey of 547 people on twelve topics he did for his 2016 book Writing Without Bullshit – boost your career by saying what you mean. 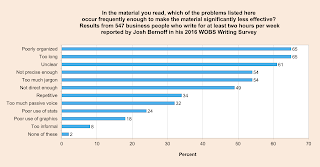 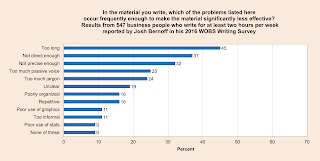 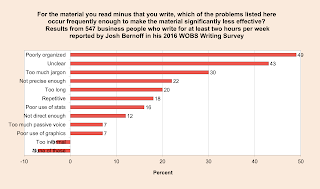 There are large discrepancies between what people read and what they write, as shown by a third bar chart for differences. 65% thought what they read was poorly organized versus just 16% for what they write – a difference of 49%. The difference for Unclear was 43%, for Too much jargon 30%, for Not precise enough 22%, and for Too long 20%. In the Harvard Business Review article Joel notes we think writing quality problems are someone else’s fault. He also asked people how effective what they read was on a scale from 1 to 10, and the answer was just 5.4, but for what they write it instead was 6.9.

The image of a woman reading was adapted from one at Wikimedia Commons.

Posted by Richard I. Garber at 7:57 AM No comments:

How to decide if a news story is fake 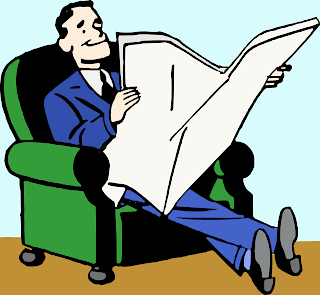 Brian Dunning has an excellent article at Skeptoid on November 22, 2022 titled How to Spot Fake News. His headings are:

Make sure the news also appears on reliable news sources

There is an article by Jordan Liles at Snopes (Fact Check) on November 17, 2022 titled Did Disney file a patent for roller coaster that jumps tracks? He notes the original source is a satire site, The Mouse Trap. I suspect the picture was edited using the clone-stamp tool in Photoshop to remove the tracks - which have a plain blue sky for background.

There is another long article by David Gorski at Respectful Insolence on November 23, 2022 titled “Died Suddenly”: Resurrecting the old antivax lie of depopulation. He debunks the ‘evidence’ and conspiracies in that pseudo-documentary from Stew Peters. There is a fact-checking article by Bill McCarthy at Poynter on April 22, 2022 on an earlier ‘documentary’ titled Radio Host Stew Peters’ “Watch the Water’ film ridiculously claims COVID-19 is snake venom. Another article by Jonathan Jarry at the McGill Office for Science and Society on November 25, 2022 is titled The anti-vaccine documentary Died Suddenly wants you to feel, not think.

On August 7, 2017 I blogged about Spotting fake news and finding reliable information for speeches.

An image of a man reading a newspaper was adapted from Openclipart.

A cartoon about editing the introduction for a speaker 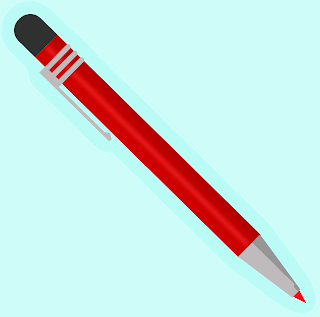 “Pig: I have to give a speech introducing someone but I’m not sure if it’s the right length.

Hi, everyone, it’s an honor to introduce our next guest. If you’ll just indulge me, here is his incredible background….Four years at Berkeley, three years at UCLA, seven years teaching at Georgetown. Winner of two Pulitzer Prizes and four distinguished fellowships. An avid fly fisherman. Father of four children. Devoted collector of stamps and model trains. Hero to millions. Help me give a warm welcome to our guest, the incomparable Ned Johnson.

Rat changes it to just be: Hi…Here’s Ned.

Pig: Editing is such a skill.

More seriously, you might try describing Topic, Importance, and Speaker, as is discussed by Kim Harrison at Cutting Edge PR on June 1, 2020 in an article titled Use this great way to introduce a speaker – it’s more important than you think.

The image of a pen was adapted from one at Openclipart.

Posted by Richard I. Garber at 6:19 AM No comments:

Conversation Starters can also be used for Table Topics questions 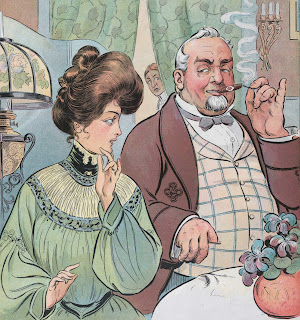 Table Topics is the impromptu speaking section of a Toastmasters club meeting - where members without roles in running the meeting participate by providing one-to-two-minute answers to questions. Table Topics is discussed in a brief article by Greg Lewis on pages 26 and 27 of the January 2022 Toastmaster Magazine titled The two sides of Table Topics.

There also is a book from 2003 by Garry Poole titled The Complete Book of Questions: 1001 Conversation Starters for Any Occasion.

The October 21, 1903 Puck magazine cartoon of a conversation came from Wikimedia Commons.

Posted by Richard I. Garber at 6:37 AM No comments:

Give me a seat, so I can rest my feet 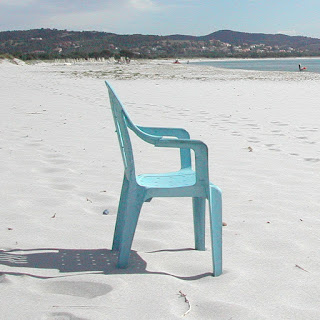 At the main Boise Public Library I recently borrowed a DVD of Monobloc -  a 91-minute 2021 documentary by Hauke Wendler (in German with English subtitles) about one-piece injection-molded plastic chairs like the one shown above. About a billion monobloc chairs have been made. The film is about the social impact of design. You can watch a two-minute trailer on YouTube. There is an article about it by Thomas Wagner at ndion on January 26, 2022 titled Monobloc: What matters is that you sit. In India these inexpensive chairs meant that people could sit up to dine in their homes rather than sitting on the floor. Monobloc chairs also were used as the seat for the first-generation design of an inexpensive wheelchair given away by the Free Wheelchair Mission. 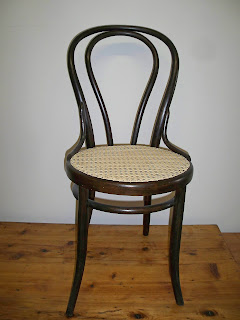 There also were some nineteenth century chair innovations by Michael Thonet. Way back in 1859 the bent wood Thonet Chair No. 14 (shown above) was introduced. There is an article about it at the Design Museum which says fifty million of this design were sold by 1930. 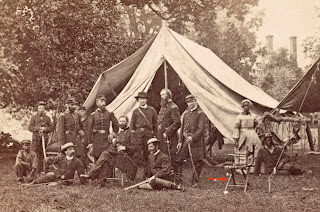 There also is the director’s chair. An article by Hadley Mendelsohn at House Beautiful on January 10, 2022 titled How the director’s chair became an icon on set and beyond says it was introduced 130 years ago in 1892. But, as shown above, you can find one in a Civil War photograph by Matthew Brady from back in 1862.

Keep your well of speech topics from running dry 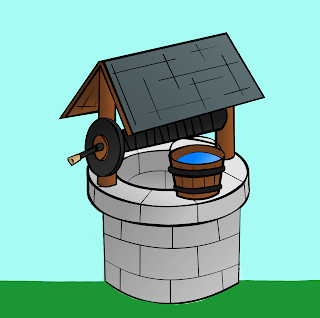 There is a brief article by Denis Judy at Exploring the Mind on November 13, 2022 titled Keeping our Speaking Well From Going [Dry]. It opens with:

“If you speak a lot, there are times when you may feel your material is getting stales and you lose enthusiasm for your content. When that happens you need new material that excites you and thus makes your speeches more stimulating.

A fun way to do that is to pick a subject, hobby, avocation, culture, or sport about which you know nothing but are interested in learning more. Then immerse yourself in it. Read all you can about it, talk to people who know about it, and experience it if possible.”

One way to find new material is via writing prompts, which are a way of getting around writer’s block. On December 15, 2020 I blogged about how to Use writing prompts to get unstuck. And on November 12, 2022 I blogged about how Writing prompts also can be used for Table Topics. In that recent post I linked to an article at the Learning Network in the New York Times on September 8, 2022 titled 445 Prompts for Narrative and Personal Writing. It has a long list with 37 categories. You can also download it as a pdf file. Each item on their list actually is a link to another article you can use to get started. But that’s not all. There is another article on February 23, 2021 titled 300 Questions and Images to Inspire Argument Writing, also downloadable as a pdf.

The cartoon of a well came from Openclipart.