What should we call the stage furniture where we put our notes, laptop computer, and other stuff when we speak? 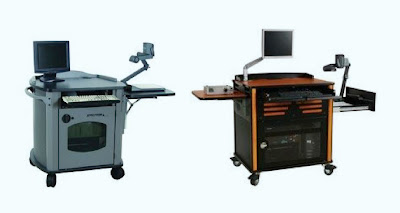 Should it be termed a multimedia lectern, or a presentation station, or even a projector cart? That may be an important question when communicating with an event organizer about the setup we need.

In North America, what isn’t important is just to distinguish between a podium and a lectern. (You stand on a podium, and supposedly you stand behind or in front of a lectern). Current North American usage does not make that distinction. The Oxford English Dictionary shows lectern in their second definition for podium, and their free online dictionary includes it too. Webster’s started including it way back in 1961, and their 1989 Dictionary of American Usage explained why. Ben Zimmer, whose job includes nitpicking, discussed the topic two years ago in one of his Visual Thesaurus columns about Owning the Podium (and the Lectern). He still suggested making a distinction.

Late last month Craig Senior posted a nitpicking article about What is a lectern or podium? at the Message Masters Toastmasters web site. On Saturday John Zimmer (no relation to Ben?) blogged about Podium vs. Lectern. (John also is a Toastmaster).

Back in July 2009 I blogged about getting A Visit from the Lectern/Podium Police Patrol. Another old Toastmaster had taken issue with the closing sentence in the last paragraph of a previous post:

“Fear of public speaking is the most significant social fear for residents of the U.S. Fear of speaking up in a meeting or class is a very close second. Both affect about 1 in 5 Americans. Toastmasters, the best way to overcome both of those fears, remains the number one antidote. Don’t be snake bit – tell everyone how they can feel confident and competent behind and, yes, even in front of the podium.”

He claimed that a podium only was something you stand on. In my reply I gave five specific examples with the other use in recent books. I also pointed out that talking about where a word is derived from (etymology) isn’t relevant to its current usage (lexicography).

I think we have to carefully tell event planners how many flat or slanting surfaces we desire, and what heights they should be. Then they can tell us what they have, and we can compromise to get a presentation setup that really works. What do you think?

The multimedia lectern images came from here and here on Wikimedia Commons.
Posted by Richard I. Garber at 11:22 AM