National Speak Up and Succeed Day was on Tuesday 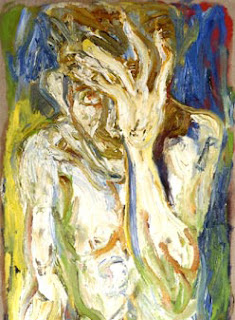 Oops! I missed that January 22nd apparently was National Speak Up and Succeed Day. It’s the fourth Tuesday in January. That event was created by Mary-Ellen Drummond, who has an inspirational YouTube video on Turning Fear of Speaking Into Excitement.


The text of it opens with:

“The greatest fear of Americans is not dying...it’s public speaking.

‘Everybody’s afraid of something - that’s how we know we care.’
Kevin Costner,  The Bodyguard

Someone once said: ‘If God wanted us to be brave, then why did he give us legs?’ “

Back in October I blogged about how Either way you look at it, public speaking is not our greatest fear.

A longer, better version of that quote from the script of the 1995 movie The Bodyguard is:

“Everybody’s afraid of something...that’s how we know we care about things...when we’re scared to lose them. What are you afraid of?”

Marvin Kitman was the someone who said the second quote about bravery and legs.

The image is from Billy Childish.