Seth Godin gave an incomplete solution for fear of public speaking. Here is the other part he missed. 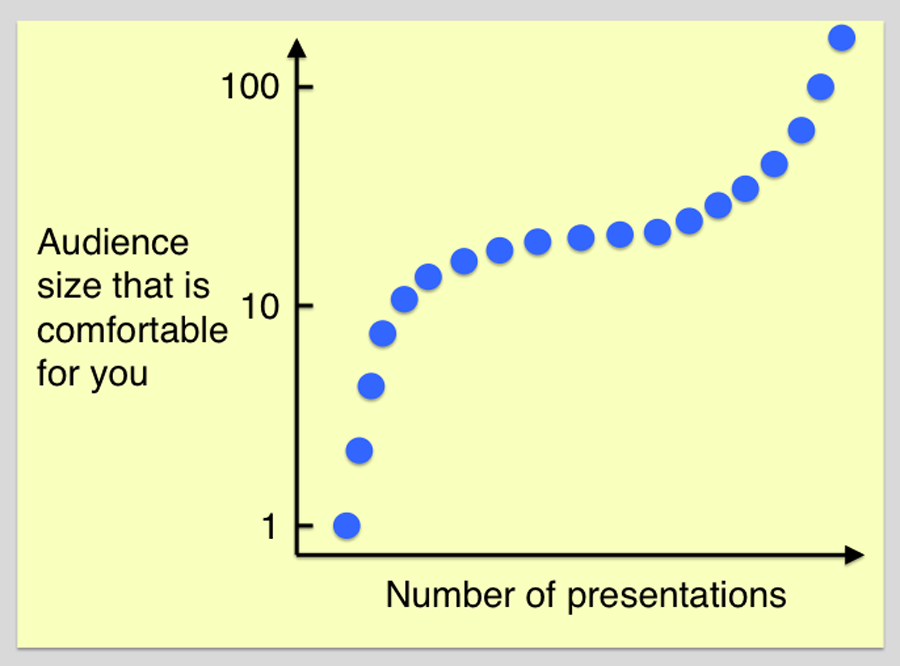 One way to approach a fearful situation is like learning to swim. You should wade in from the shallow end of the pool rather than jumping in the deep end. As shown above, you might begin by speaking to a small audience and then gradually move to larger and larger ones.

On January 26, 2015 Seth Godin blogged about Fear of public speaking. He posted less than 240 words as follows:

It's the public part that's the problem.

What makes it public? After all, speaking to a waiter or someone you bump into on the street is hardly private.

I think we define public speaking as any group large enough or important enough or fraught enough that we're afraid of it.

And that makes the solution straightforward (but not easy). Instead of plunging into these situations under duress, once a year or once a decade, gently stretch your way there.

Start with dogs. I'm not kidding. If you don't have one, go to the local animal shelter and take one for a walk. Give your speech to the dog. And then, if you can, to a few dogs.

Work your way up to a friend, maybe two friends. And then, once you feel pretty dumb practicing with people you know (this is easy!), hire someone on Craigslist to come to your office and listen to you give your speech.

Drip, drip, drip. At every step along the way, there's clearly nothing to fear, because you didn't plunge. It's just one step up from speaking to a schnauzer. And then another step.

This is not easy. It's difficult. But that's okay, because it's possible.”

Psychologists call what Seth described (systematic or progressive) desensitization. But, it is just one part of a more effective solution called Cognitive Behavioral Therapy. A web page from the National Institute of Mental Health says:

In his TED talk on What I learned from going blind in space last year Canadian astronaut Chris Hadfield described both parts of CBT using fear of spiders as an example. It took him less than three minutes (corresponding to less than 500 words, and starting at 8:30). He said:

“So, what’s the scariest thing you’ve ever done? Maybe it’s spiders. A lot of people are afraid of spiders. I think you should be afraid of spiders. Spiders are creepy, and they got long hairy legs, and spiders like this one, the brown recluse, I mean it’s horrible. If a brown recluse bites you end up with one of these horrible big necrotic things on your leg.  And there might be one right now sitting on the chair behind you in fact, and how do you know? And, so a spider lands on you, and you go through this great spasmy attack because spiders are scary. But then you could say, well is there a brown recluse sitting on the chair beside me or not? I don’t know.

Are there brown recluses here? So, if you actually do the research you find out that in the world there are about 50,000 different types of spiders, and there are about two dozen that are venomous out of 50,000.

And if you’re in Canada, because of the cold winters here in BC, there’s about 720, 730 types of spiders, and there’s one, one that is venomous and it’s venom isn’t even fatal. it’s just kind of like a nasty sting. And that spider, not only that but that spider has beautiful markings on it. It’s like ‘I’m dangerous,’ I’ve got big a radiation symbol on my back. It’s the black widow.

So, if you’re even slightly careful you can avoid running into the one spider. And it lives close to the ground. When you’re walking along you are never going to go through a spider web where a black widow bites you. Spider webs like this, it doesn’t build those. It builds them down in the corners. It’s the black widow cause the female spider eats the male. It doesn’t care about you.

So, in fact, the next time you walk into a spider web you don’t need to panic and go with your caveman reaction. The danger is entirely different than the fear.

And, how do you get around it though? How do you change your behavior? Well, next time you see a spider web, have a good look. Make sure it’s not a black widow spider, and  then walk into it.

And then you see another spider web, and walk into that one. It’s just a little bit of fluffy stuff,  it’s not a big deal. And the spider that may come out is no more a threat to you than a ladybug, or a butterfly.

And then, I guarantee you, if you walk through a hundred spider webs, you will have changed your fundamental human behavior, your caveman reaction. And you will now be able to walk in the park in the morning, and not worry about that spider web. Or into your grandma’s attic, or whatever, or into your own basement.

And you can apply this to anything.”

The plateau at an audience of about 20 in my graphic represents a series of speeches done in a public speaking class or a Toastmasters club.

Great post, Richard. It was smart to tie these types of exercises back to cognitive behavioral therapy. Spot on, and I loved your analogy of wading into a pool from the shallow end first, rather than jumping right into the deep end. I've listed some more "exercises" (I compare it to working out with small weights first), over here: http://www.bettercommunicator.ca/desensitize-yourself-to-public-speaking-anxiety/.

Looking forward to reading more posts from you!