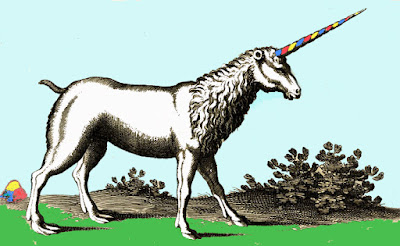 Occasionally I run a Google search on fear and public speaking. My latest one turned up a March 22nd blog post titled The pooping unicorn and the fear of public speaking by Steven Sobieszczyk who this month started to blog as Steve Sobie at Your Next Big Speech (subtitled Parenting & Public Speaking. Together). It includes a five-minute Youtube cartoon video about his wife telling a bedtime fairy tale to calm his young daughters - that unicorns poop ice cream. How could they do that without freezing their behinds off?

The third sentence of his text says:

“....Glossophobia is the fear of public speaking and it is the #1 fear of most people.”

That’s also a fairy tale. Glossophobia is a pseudo-technical term. And, either way you look at it, public speaking isn’t the number one fear. In the 2015 Chapman Survey it ranked 26th out of 89. Steve is an adjunct professor in the geography department of Portland State University, so you’d expect him to have researched what he said.

I hadn’t known that unicorns pooped ice cream - I thought they just pooped pure sugar or perhaps rainbow fudge. When I Googled unicorns and poop I found an amusing and disturbing YouTube video titled This Unicorn Changed the Way I Poop - #SquattyPotty for a  product called the Squatty Potty. It showed an animated unicorn pooping rainbow soft- serve ice cream! A more medically correct name for that product would be the Stool Stool.

An image of a unicorn was adapted from this one at Wikimedia Commons.

Holy crap! Today's F Minus cartoon shows a toilet with a retractable footrest like a Squatty Potty.