Why less is more – or even less 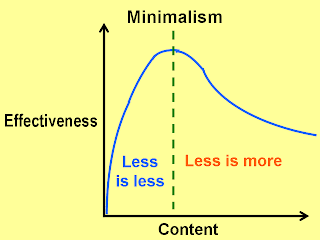 On March 7th Bob Malloney posted an article titled Public Speaking - Why Less Is More. He began by lamenting that most business presentations he heard suffered from information overload. They could have been improved by presenting less information. Cut your presentation down until it is simple and powerful, with just a few main points.

The aphorism of minimalism that “less is more” is commonly associated with the German-American architect, Ludwig Mies van der Rohe who lived from 1886 to 1969.

“…follow the proverb, ‘Less is better than more.’ Never use three words when you can say it in two.”

Heinemann was particularly famous as the designer of the agile, little, delta-winged A-4 Skyhawk attack aircraft. If you saw the movie Top Gun, then you saw the instructors in their Skyhawks merrily harassing the bigger, faster F-14 Tomcats. (For 13 seasons the Navy’s aerobatic team, the Blue Angels, flew Skyhawks).

Minimalism in all kinds of design involves an optimum, so “less is more” is a half-truth. It really calls for cutting out the fat while leaving the meat. You cannot keep cutting and expect that a design with zero content would be infinitely effective. Instead it probably would be completely ineffective. So, really less is more – until it is less. 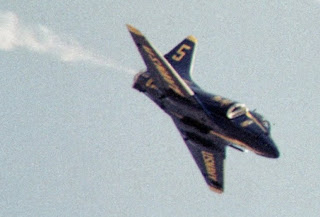 That's a great visual you've created which makes your point beautifully. Could the right hand side say "More is less" rather than "Less is more"?

Being French, I must mention Antoine de St Exupery (author of "the Little Prince"). In Chapter III of his book (terre des hommes) translated as "Wind, Sand, and Stars, he writes "In anything at all, perfection is finally attained not when there is no longer anything to add, but when there is no longer anything to take away..."
I also have an entry on the same topic in my blog, should you be interested (Is “Less is more” a presentation law as universal as the law of gravity?)

My graphic was labeled to match the title for the post. Professor Boyd probably was intentionally ironic with his additional “better than”. In Toastmasters he was the 1970 World Champion of Public Speaking.

Your blog post on February 4th is far more detailed than mine. I missed seeing yours, so my topical inspiration came from the Bob Malloney post I mentioned.

The full quote from page 42 of Wind Sand, and Stars (on Google Books) says that:

I probably read Wind, Sand, and Stars before 1970, so it also may have unconsciously influenced what I wrote. Going further back, I was aware of Frank Lloyd Wright and his approach to design because my father knew one of his apprentices, Abe Dombar.

Inspiration for the graphic came from Don McMillan’s video on Life After Death by PowerPoint 2010. About 7 minutes from the beginning he has a Line Graph of # of Line Graphs with roughly the same shape I used, rather than the hyperbola found in his earlier video.