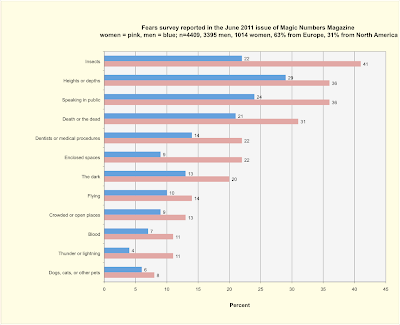 Results are shown above in a bar chart. (Click on it to see a larger, clearer version). I have ranked the fears in decreasing order for women. The largest percent of them feared insects, followed by a tie between public speaking and heights or depths. Death or the dead came in third, followed by dentists or medical procedures. The largest percent of men feared heights or depths, followed by public speaking, insects, death or the dead, and dentists or medical procedures.

Adding the dead (presumably zombies, the walking dead) to the question raised its relative ranking versus public speaking. Bloodthirsty zombies have been getting more popular in films ever since the 1968 release of Night of the Living Dead.