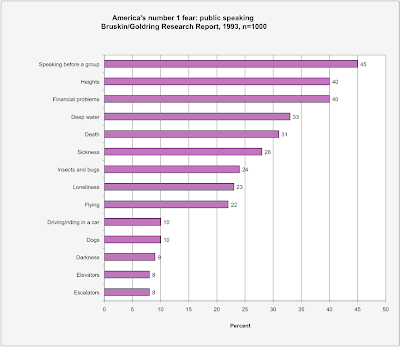 Three years ago I bought a copy of Lilyan Wilder’s 1999 book, 7 Steps to Fearless Speaking. The Introduction on page 1 began by stating:

I’d always been curious about the detailed results from that survey, titled “America’s number one fear: Public speaking,” since an earlier version of the Bruskin organization also had been responsible for the 1973 survey reported in the 1977 Book of Lists and then cited ad nauseum. The data from the 1993 survey were reported again last year by Sherwyn P. Morreale in Table 3.3 on page 53 of her book The Competent Public Speaker, and I found them over at Google Books. I’ve plotted then above in a bar chart, which you can click on to enlarge. 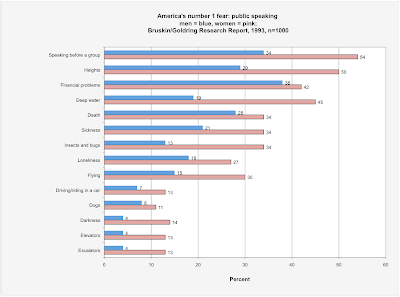 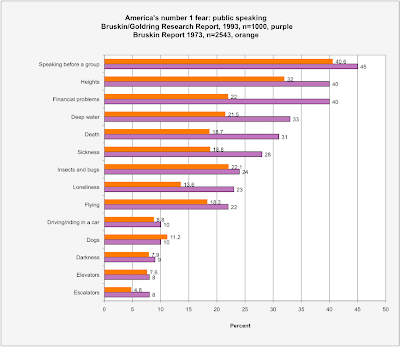 It’s also interesting to compare the results from the 1993 survey with those from the 1973 survey. In 1993 the fears of financial problems, deep water, death, and sickness all were much larger than they were in 1973. The 2001 Gallup poll is more recent than the 1993 Bruskin survey, but it says Snakes Top List of Americans’ Fears. Only the Bruskin surveys let us compare public speaking and death.

At the bottom of page 53 of The Competent Public Speaker the detailed reference is to:

How did she find out about that report? She was Associate Director of the National Communication Association. There was a magazine article by Sherywn P. Morreale, Michael M. Osborn, Judy C. Pearson titled Why Communication is Important: A Rationale for the Centrality of the Study of Communication that was published in the Journal of the Association for Communication Administration V 29, 2000 pages 1 to 25. It refers to that Bruskin-Goldring report on page 5.