Magazine article on how to prepare and deliver a great talk 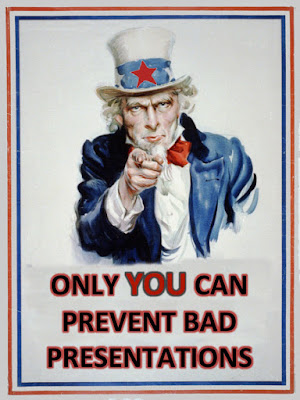 The Federation of European Biochemical Societies publishes The FEBS Journal, which recently had an excellent seven-page Words of Advice article by Rita Gemayel and Seamus J. Martin on How to prepare and deliver a great talk. The first gray box in it had advice on being a good audience member. The second gray box had seven items of bad advice, the first two of which are:

“Do not rehearse your talk. Spontaneous talks are much better, just like spontaneous pension plans and spontaneous climbs of Mount Everest. What could possibly go wrong?


Never start a presentation from scratch. Just cobble together slides from old presentations and explain any key missing diagrams in words as it occurs to you. The audience will figure out what you mean, even if you do not really know what you want to say. Or what you mean. Either way it will be fun, right?”

After telling us what not to do they proceeded to give good advice. Way back on June 24, 2008 I also used the format of telling what NOT to do in a post titled Don’t be a “Flip Chart Charlie”. The Uncle Sam poster previously appeared in my 2016 New Year’s post titled Remember that only YOU can prevent bad presentations.