A less-than-mediocre newspaper column about an Idaho education ranking

On July 13, 2018 there was a press release from the Idaho State Board of Education titled Idaho ranked in the top five states for college readiness by national publication and another press release from the Idaho State Department of Education titled Idaho students’ college readiness ranks state in top 5 of national report. Both releases linked to an article from U.S. News and World Report on July 12, 2018. The State Board link leads to the U.S. News article, then can be followed to the full list. The State Department of Education article goes directly to one slide instead.

“Parents, students, and competent teachers deserve better than a public education system that celebrates mediocrity. That’s what they got last week when the state’s top education officials hailed a report that ranks Idaho No. 5 nationally for college readiness of its graduating high school seniors.

The ranking comes from U.S. News & World Report, which looked at college-entrance test results to determine which states produce the best prepared-for-college high school students. Idaho was singled out for being the only Western state in the top ten.

Public schools superintendent Sherri Ybarra called it ‘great news, affirming our belief that Idaho schools are doing a good job of preparing students for post-high school success, even as compared to most other states.’ Dr. Linda Clark, the State Board of Education president, also cheered the news. However, upon review of the ranking criteria, the cheering should stop.

The Gem State got its ranking because 55 percent—yes, only 55 percent—of its high school seniors met college-entrance exam benchmarks. According to U.S. News & World Report, the benchmarks ‘represent scores students would need to achieve in order to have a 75 percent chance of earning a C or better in a related college course.’ Some might argue, as I do, that 55 percent isn’t exactly a stellar number by any measure. If 55 percent of your business’s products were failing, you’d fire people. In public education, one breaks out the champagne and serves up self-congratulatory accolades by press release.

It gets worse. U.S. News & World Report also noted that just 36 percent of Idaho high school students were able to meet the benchmarks on the math portion of the college entrance exams. In other words, some two-thirds of Idaho school students aren’t ready for college mathematics. Neither Ybarra nor Clark acknowledged this fact in their respective press releases. The State Board noted the issue when I posed follow up questions (the Board wants the figure improved, more money will help, a spokesman said). Ybarra’s office ignored questions about the statistic.”


As is usual, Wayne didn’t bother to link to the press releases he criticized or to the U.S. News article. Nor did he check the dictionary definition for mediocre – “of moderate or low quality, value, ability, or performance” which clearly DOES NOT apply to a ranking of 5 out of 50 (top ten percent). And his whine in his fourth paragraph that: “If 55 percent of your business’s products were failing, you’d fire people” instead should be 45 percent. His fifth paragraph omitted the other statistic from The U.S. News article which had said:

“Students in Idaho performed far better on the writing portion of the SAT than the math section. Based on the results, around 63 percent of students were prepared for writing-related courses, while only 36 percent met the benchmark for math courses.”

Neither Wayne Hoffman nor the State Board of Education or State Department of Education put that ranking of 5th into a broader context. But Kevin Richert did in an IdEdNews article on July 16, 2018 titled Analysis: A closer look at Idaho’s ‘College-Ready’ ranking. Kevin noted that there were other overall rankings both for K-12 (#25) and for higher education (#33). 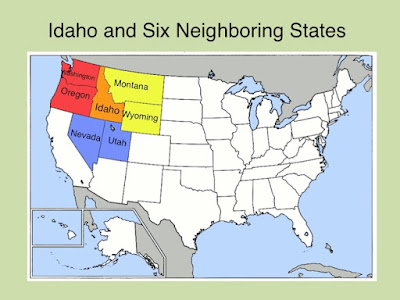 What we should look at is the more detailed rankings for both Idaho and our six neighbors – Montana and Wyoming to our east, Washington and Oregon to our west, and Nevada and Utah to our south. 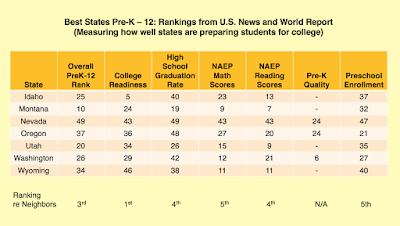 Rankings for Pre-K to 12 are shown above in a table. There are six factors, only one of which is College Readiness. We did poorly for the other factors twice #4 and twice #5. Idaho’s overall ranking of 25th in the country was exactly in the middle, so we really were mediocre (as was our neighbor Washington at 26th). But we were #3 compared with our neighbors –  beaten by both Montana (#10) and Utah (#20). 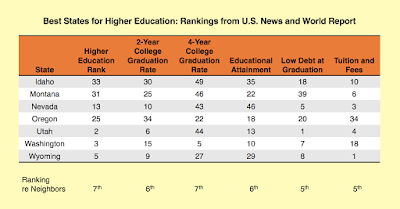 Rankings for Higher Education are shown in another table. Here there are five factors. We did  poorly when compared with our neighbors – twice we were 5th, 6th, and 7th and overall a dismal 7th (and 33rd in the entire country).

Rankings are a simple way of keeping score, but do not reveal if adjacent states are close or far away from each other. You need to compare the actual numbers. For example, the bar chart shown above has 2016 milk production for Idaho and its six neighboring states. Without looking at the actual figures you’d have no way of knowing that Idaho produced more milk than all our neighbors put together. 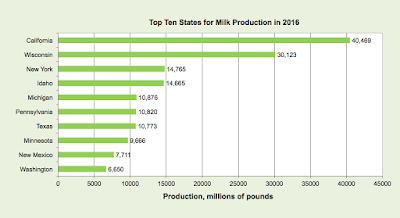 And similarly, when you look at the Top Ten states for milk production in 2016, California was way ahead of everyone else, followed by Wisconsin. Idaho came in 4th but was barely behind New York. Behind us there was almost a three-way tie between Michigan, Pennsylvania, and Texas.