Pausing properly during your speech 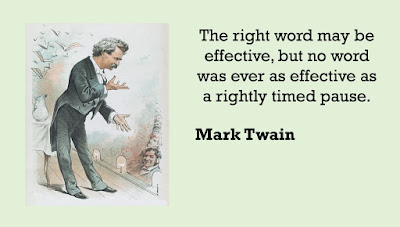 Samuel Clemens, whose pen name was Mark Twain, reportedly once had said that:
“The right word may be effective, but no word was ever as effective as a rightly timed pause.” 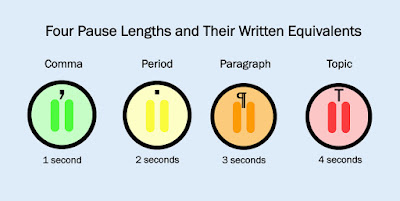 One way to think of pauses is the verbal equivalent of punctuation. As is shown above, they can have at least four different lengths, corresponding to commas, periods, paragraphs, and topics (sections). All those lengths typically are not mentioned in discussions of pausing. A post by Keith Bailey on February 12, 2013 at the Decker Communications blog titled Power to the pause mentioned three:
“When there should be a comma, pause for one second. Where there should be a period, pause for two seconds. When you see a new paragraph, pause for three seconds.”

Another post by Noah Zandan on February 19, 2013 at the Quantified Communication blog titled The power of pause similarly said:
“Great public speakers often pause for 2 – 3 seconds or even longer. Punctuation can be helpful for deciding where to insert pauses. We use commas and periods as signs to pause when we are reading. These are the same places to pause when giving a speech. An especially useful strategy is to vary the length of your pauses.”

An article by Patricia Fripp titled Public speaking – the importance of the pause shared Ron Arden’s explanation of three length ranges: ½ to 1 second, 1 to 2 seconds, and 3 to 7 seconds.

Pauses can be used functions other than punctuation:
At the beginning of a speech


After you ask a rhetorical question


After you present data on a slide


For emphasis after you present a key point


After you deliver the punchline of a joke


To recover when you lose your place

Fripp’s article mentioned nine types of pauses, and an article by Esther Snippe on February 7, 2017 at SpeakerHub titled Speak volumes with your silence: 10 ways to use pauses has an infographic with ten.

A four-minute YouTube video by Darren LaCroix titled Presentation coaching: the pause says that Toastmasters champions paused with purpose. Another four-minute YouTube video by Brian Tracy titled Public speaking tip: the power of the pause is also useful. I was amused by Brian’s constant gesturing, including his use of the ‘sternwheeler steamboat paddle’ gesture - which signals illegal formation in football and traveling in basketball.

The Twain quote appears in an Introduction by biographer Albert Bigelow Paine to the 1923 edition of Mark Twain’s Speeches. The image of Mark Twain was adapted from a December 16, 1885 back cover of Puck magazine found at the Library of Congress.