Public speaking only was the 7th most common fear of Americans on a Top Ten list in a survey reported on January 24, 2019 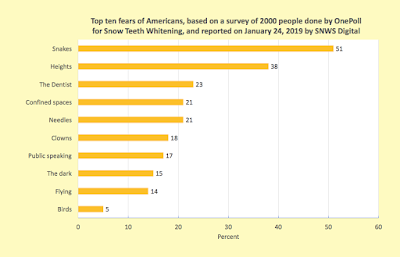 It still is common to hear the silly claim that public speaking is our number one fear. On January 24, 2019 there was an article (press release) at SWNS digital titled The average American laughs 8 times a day, study finds. It reported results from a survey of 2000 Americans done by OnePoll for Snow Teeth Whitening, who obviously were seeking publicity for their recently released product. The top ten fears list is shown above in a bar chart. (Click on it for a larger, clearer view). Snakes (51%) were followed by heights (38%), dentists (23%), claustrophobia (21%), needles (21%), clowns (18%), public speaking (17%), the dark (15%), flying (14%), and birds (5%). Presumably the fears survey really was done to get a rank for dentists. 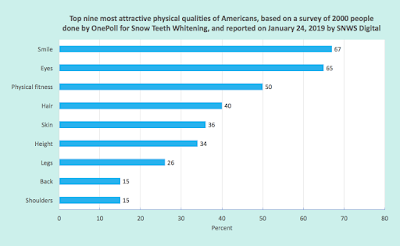 A second bar chart reports the top nine most attractive physical qualities, with a smile (67% or ~two-thirds) ranked number one, with eyes (65%) being second. Height (34% or ~one-third) was sixth. 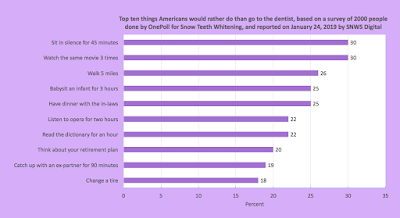 A third bar chart reports ten things Americans would rather do than go to the dentist. 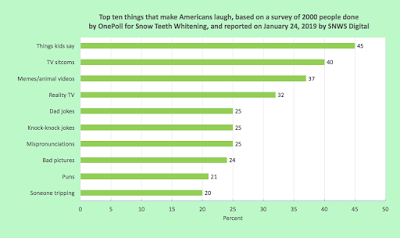 A fourth bar chart reports the top ten things that make us laugh, and show off our smile.