What do people in Singapore fear a lot or a little?

Speaking coaches often claim that public speaking is the greatest (or really the most common) fear. But that’s often not backed up by survey data. On August 11, 2013 I blogged about how Public speaking was ranked sixth by a survey of workplace phobias in Singapore.

On October 31, 2019 YouGov had an article titled Singaporeans’ greatest fears revealed that reported results from a survey of 1,033 people done in October 2019. They asked whether 15 items were feared a lot, a little, or not (at all). 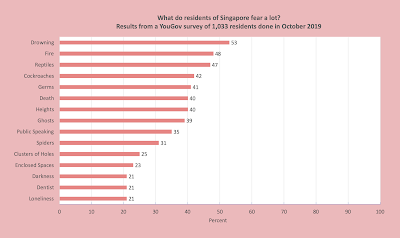 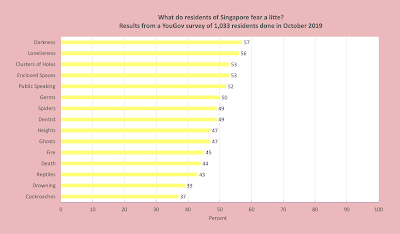 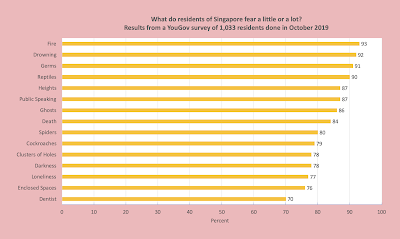 Posted by Richard I. Garber at 4:52 AM No comments: Links to this post

What occupations and characteristics are creepy?

At Psychology Today on May 19, 2015 there was an article by  psychologist Francis T. McAndrew titled How we decide who’s creepy. Then in 2016 there was a detailed article by Francis T. McAndrew and Sara S. Koehnke titled On the nature of creepiness at New Ideas in Psychology (Volume 42, pages 10 to 15). You can download it here. They did an online survey of 1341 adults at a liberal arts college in the Midwestern U. S. But there were 1029 females, and only 312 males - almost 3.3 times as many females as males. McAndrew also has a bibliography of his writings about creepiness. 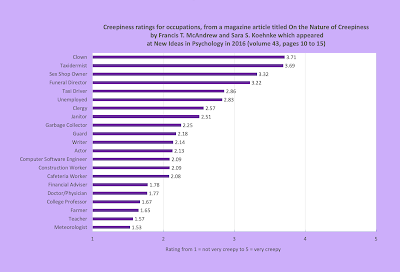 As shown above, the four creepiest occupations were clown, taxidermist, sex shop owner, and funeral director. 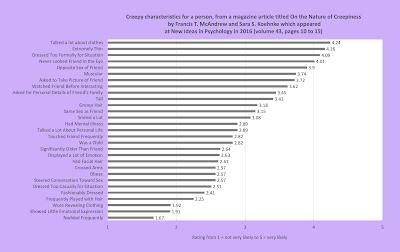