The American car isn’t dead yet 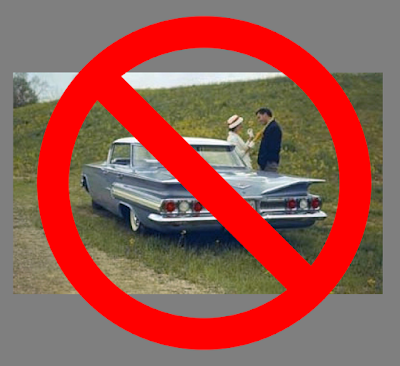 On April 26, 2018 Jane Genova blogged about the claimed Death of the American Car. She had seen an article by Robert Ferris at CNBC on that day titled Ford is basically giving up on US car business, and GM is not far behind. Based on superficial research Jane whined:

“It was obvious way before Ford and GM made their recent announcements about cutting back car production. Anyone could just look around the parking lots of even lower middle class apartment complexes. There would be no cars. Instead there were – and are – pickups, SUVs, and cross-overs. Yes, the American car had died. No one seemed to care.”

But if Jane had looked further she would have seen a very different picture. For example, at Bloomberg on January 16, 2018 there was an article titled The American sedan is dying. Long live the SUV which was subtitled Detroit executives are killing off their slow-selling cars in favor of SUVs. That article has a graph comparing actual and projected annual US vehicle sales for cars and trucks. In 2012 the mix was even at 50% trucks - 50% cars. In 2016 it had shifted to 60% trucks – 40% cars. In 2020 it would be 65% trucks – 35% cars. That article also said:

“American auto executives might be happy to see passenger cars go. For decades, they’ve struggled to make money selling sedans while raking in profits from SUVs and trucks.


…. Asian automakers that have come to dominate U.S. sedan segments over the last three decades aren’t going anywhere. The Toyota Camry remained the top-selling car in America last year, though it was outsold by the RAV4 crossover for the first time. Toyota recently revamped the Camry and debuted a redesigned Avalon sedan in Detroit, while Honda Motor Co. kicked off the show by accepting the North American Car of the Year award for its revamped Accord. Nissan Motor Co. is expected to roll out a refreshed Altima sedan soon.”

Another article at Automotive News on October 1, 2017 titled U.S. auto production undergoes a decade of transformation showed the percent share of North American light-vehicle production by automaker. For the first 8 months of 2017 three Japanese automakers contributed a total of 32.7% (almost a third): Toyota 11.5%, Honda 10.7%, and Nissan 10.5%. (Hyundai-Kia was 5.4% and VW Group was 3.5%). And a press release from Honda on March 6, 2018 said Honda builds its 25 millionth automobile in the U.S. (They started in Marysville, Ohio ~175 miles from Jane’s Youngstown location).

Jane continued about her childhood in Jersey City:

“….In a sense this era of The Big Vehicle returns us Baby Boomers to our youth. Back then there were no small cars. My father’s first was a boxy Buick. The whole extended family fit in. Eventually he and his fellow Italian immigrant buddies landed good enough jobs to move on up to the Cadillac. That, not the purchase of a single-family house, was their version of the American dream.”

I’m a Baby Boomer, and grew up in Pittsburgh. I do remember small cars like the Nash Rambler, which was the subject of the 1958 Beep Beep song by the Playmates. But the smallest, cheapest car was the two-seat King Midget – a microcar from Athens, Ohio featured in tiny ads in the back of Popular Mechanics magazine (and an article in the 1954 issue). Look at the March 12, 2016 article in USA Today titled Just Cool Cars: This 1954 King Midget was fit for a pauper.

Also Jane only got 2/5ths of the divisional marketing strategy cooked up for General Motors by Alfred P. Sloan back in the 1920s. An excerpt from the David Evans book Management Gurus says those divisions were (in order of increasing price): Chevrolet, Pontiac, Oldsmobile, Buick, and Cadillac. Oldsmobile was closed in 2004, and Pontiac in 2010.

On April 30, 2018 Jane Genova had another superficially researched blog post about how SUVs – Disaster. She noted that gas prices are ‘surging’ and referred to an AP article titled Get ready for the most expensive driving season in years which noted they had risen from $2.39 a year ago to $2.81 yesterday (although she mistakenly also said $2.81 for a year ago). Then she claimed:

Posted by Richard I. Garber at 4:09 PM No comments: Links to this post

How not to deliver a world-class infographic on presentation anxiety

On August 4, 2017 the Hong Kong based Malcolm Andrews issued a press release titled Leading Executive Coach Reveals the Tricks to Delivering a Killer Presentation Despite Common Anxiety that linked to an infographic titled HOW TO DELIVER A WORLD CLASS PRESENTATION.

The section on anxiety at the top of this infographic, shown above, begins with a pair of ‘statistics’ that just are legends – and are displayed via silly donut (hollow pie) charts.

The first claim is: “Around 75% of the population worldwide suffer from the fear of public speaking, and for many, their fear is so great it could derail their careers.” On February 3, 2014 I had blogged about Busting a myth – that 75% of people in the world fear public speaking. In that post I chased down where that old number came from. It really just is about the U.S., and likely university students. 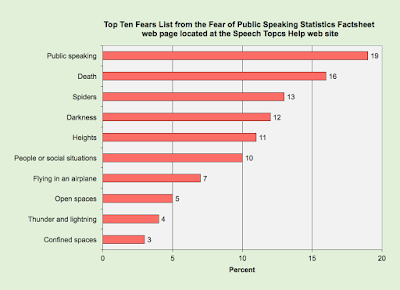 The second claim is: “In fact, 19% of the population are more afraid of public speaking than death, spiders, heights, and dark.” That really comes from a pie chart by Jim Peterson on the
Fear of public speaking statistics factsheet web page at his Speech Topics Help web site (shown above as a bar chart). Jim doesn’t say where those percentages came from, and I doubt they are real. The percentage for the sixth fear on the list, of people or social situations is out of place, and should be larger than that for public speaking. I discussed that on December 7, 2014 in a blog post titled Statistic Brain is just a statistical medicine show where I debunked their fears list that clearly was inspired by Speech Topics Help.

The third claim (repeating the first) is that: “Roughly 3 out of 4 people admit to being scared of public speaking. Now that’s huge!” This is followed by column charts showing the percent of females and males in ten countries, as two rows of four and one of two. 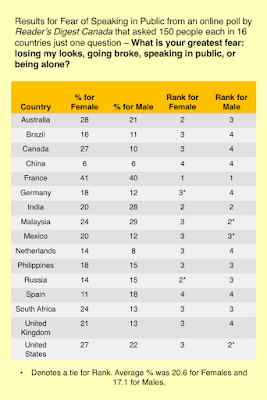 That data actually came from a Reader’s Digest Canada survey (the eleventh link) but aren’t explicitly identified either in the infographic or in the table at the bottom. But there really were 16 countries, so there should have been four rows of four. Malcolm left off India, Mexico, Netherlands, Philippines, Russia, and South Africa. I blogged about that survey on April 9, 2012 in a blog post titled Poll by Reader’s Digest Canada found fear of public speaking wasn’t ranked first in 15 of 16 countries surveyed. The table shown above lists both the percentages and the rankings by females and males. The averages for fearing speaking in public were 20.6% for females, and 17.1% for males – which are quite far from the 3 out of 4 people claim.

The fourth claim is titled “Top 10 fears of Office goers” but doesn’t say that data come from the United Kingdom, and just lists six of ten. Why not two rows of five, and why not use column bars instead of those silly donut charts with icons in their centers? Worse yet, the ninth link identifies my blog as the source – it points to a January 18, 2016 blog post titled Over a quarter of workers in the UK chose careers to avoid their office fears - although I had linked to the original source there. 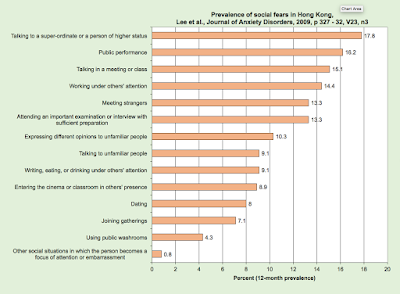 Further down in the infographic, under Preparation it admonishes that “It is important to understand your knowledge gaps regarding the situation. About what you might know or not now (sic) about the subject and the presentation.” What is the knowledge gap for this infographic? That there was a social fears survey done for Hong Kong back in 2009. I blogged about it in a post on February 7, 2011 titled Fears of superiors and public speaking in Hong Kong. A bar chart with the results is shown above. Note that the percentages apply to 12-months, so the question would be “In the past year were you” rather than “In your life were you ever.”  Public speaking (public performance) came second to talking with a higher-status person.