Stage Fright and What to Do About It

This is a 9-minute film from 60 years ago that I found on YouTube. It still has some good advice though. There are no planes and only one snake.

This film was written by Margaret Travis, and was part of a series on speech that also included: “Platform Posture and Appearance”, “Using Your Voice”, and “The Function of Gestures.” It was directed by Arthur H. Wolf.

The same team was responsible for other gems like: "Fire Safety is Your Problem", "Caring for Your Toys", "The Good Loser", and "What About Juvenile Delinquency?" Enjoy!

Posted by Richard I. Garber at 3:46 PM No comments: Links to this post 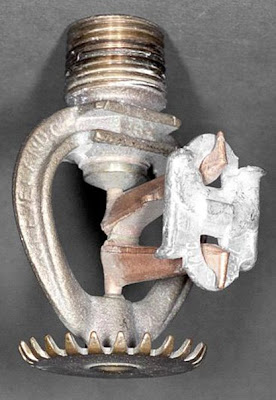 Most blog posts or articles on the topic of overcoming fear are just short teaser ads. They basically say either to take my course or to buy my book. Every once in a while there is something more authoritative. Last month a psychiatrist at the Mayo Clinic, Daniel K. Hall-Flavin, M.D. posted a 950-word web column in reply to the question of How can I overcome my fear of public speaking? Doctor Hall-Flavin discussed the following points:

2. Know your topic inside and out

4. Use audio and visual aids — for yourself, and for the audience.

5. Practice, and then practice some more.

6. Practice in front of people you know.

10. Focus on your material, not your audience.

Under the last point, about getting support, he said that:

“You aren't alone in your fear of public speaking. There are nonprofit and commercial groups out there to help you learn and practice the skills you need to overcome your fear and become the effective, confident speaker you want to be. One effective resource is Toastmasters, a nonprofit organization with local chapters that focuses on training people in speaking and leadership skills.”

Posted by Richard I. Garber at 8:40 AM No comments: Links to this post

Last June I ranted about how technical jargon had escaped from industry and was being used to confuse the public.

A few days ago I got a tabloid sized advertising flyer in the mail. An ad on the cover for The Piano Gallery began with a headline of: FORCED PIANO LIQUIDATION.

Then there were two sentences with obscure industry jargon. “Textron Financial is terminating all piano flooring. To avoid penalties and high interest rates, Utah’s Largest Piano Dealer is forced to sell all grand, upright, digital and player pianos floored with Textron.

What the heck does “piano flooring” mean? All I could think of was the scene shown in this video clip from The Fabulous Baker Boys, where Michelle Pfeiffer uses the top of a grand piano as flooring while seductively crooning the song “Makin’ Whoopee.”

“Piano flooring” actually is music jargon for one type of floor plan inventory financing. Under these agreements the finance company agrees to pay a piano manufacturer the wholesale price of a piano on behalf of the dealer, who in turn sells the piano in the retail market. The dealer agrees to pay back the finance company after having sold the piano. Similar inventory finance agreements are used for other products like boats, motorcycles, and recreational vehicles.

They should have said that: “Our problem is your opportunity to save lots of money. We need to sell these pianos immediately, since we lost our financing for keeping them on display in our showroom.”

Alfred Hitchcock used the term MacGuffin to describe a plot device, perhaps an object like secret documents, which is of much more interest to the characters in a movie than to the audience. If it does not benefit your audience, then don’t waste their time by describing the MacGuffin.
Posted by Richard I. Garber at 3:11 PM No comments: Links to this post

What is the worst acronym ever devised?

Acronyms are jargon that can confuse your audience, particularly if you do not define them the first time you use them. Acronyms should be avoided whenever possible. In a previous post on Drowning in Acronyms I lamented their wide use. Back when I was a small child acronyms still were uncommon enough that one of my mother’s friends could threaten her kids by saying that: “If you don’t behave, then I’m going to send you home COD (Cash On Delivery) on the L&N (Louisville and Nashville railroad).

Acronyms are a wonderful way of mystifying outsiders because there are no consistent rules for making them up. Sometimes articles or prepositions are included, like TMS which originally was The Metallurgical Society, and every month publishes JOM, which once was more logically called the Journal of Metals.

Some acronyms are contrived. For example, TWAIN means Technology Without An Interesting Name. CAPTCHA means a Completely Automated Public Turing (test to tell) Computers (and) Humans Apart and was even trademarked by my alma mater, . An organization can chose its name without ever thinking about how its acronym can be pronounced.

My nomination for the worst acronym ever is for what used to be called the American Symphony Orchestra League. Once they even titled their newsletter ASOL (possibly an obscene synonym for anus). Imagine calling them up and having the phone cheerily answered, “Good morning, ASOL.” It would have been much better if they had named themselves the American League of Symphony Orchestras (ALSO). In 2007 they finally did change the name to the League of American Orchestras (LAO). They now claim that corresponds to a Chinese word for “old”, as in “wise elder.”

Do you have another nominee for the worst acronym ever (WAE)?

Posted by Richard I. Garber at 1:35 PM 2 comments: Links to this post

Joy of software: What you see may NOT be what you get

We are all used to software claims that “What you see is what you get.” The long acronym for this feature is WYSIWYG (pronounced wizzi-wig). Of course, often it is not. The definition in Wikipedia waffles by saying that: “content displayed during editing appears VERY SIMILAR to the final output” rather than identical.

Even little things like carriage returns and line feeds can get messed up when you cut and paste from one application to another. Spaces can disappear or extra blank lines can appear. Symbols can be replaced by apparently unrelated ones. Fonts can be replaced by other fonts. When you go from one computer to another, watch out!

For example, if you go look at the March 25, 2009 post by Sims Wyeth on one of the FastCompany blogs about Coaching and Training for Public Speaking and Effective Sales Presentations you will see the following (my italics added to highlight missing spaces):

The FiveDon’ts of Sales Presenting

When transforming your house into a dream home,talk to three architects.

When getting heart surgery to transform thequality of your life, talk to three surgeons.

Those four missing spaces are the digital equivalent to a stutter. They started in March but seem to have gone away in his April 1 post.

Last week Mitch Ross discussed how PowerPoint fonts do not transfer properly from a Mac to a PC. Last year I found out that fonts may not even transfer in PowerPoint 2003 from my desktop PC to my laptop PC. Apparently some uncommonly used fonts like Matisse just never got loaded on my laptop. Microsoft Office was loaded on those machines about a year apart, so I may simply have chosen different options because the laptop had a much smaller hard drive. The moral is to always check your presentation before show time.

I first ran headlong into the font portability problem on word processors back in late 1993. Two colleagues and I were writing a tutorial article for the Society of Automotive Engineers on “Spot Weld Failure Analysis for Accident Reconstruction” (SAE Paper No. 940570).

As senior author I drafted most of it on my PC. Then one of my co-authors drafted the next sections on his Mac. His boss, the third author, read the printed versions of both. Then he added his text, comments, and changes. The boss’s administrative assistant next tried to put everything together into one coherent manuscript on her PC. She was going to have to send it to as camera-ready copy.

There were 12 equations and a list of 15 symbols with many subscripts. Almost nothing had moved intact from one machine to another. Even the symbol for the constant pi π got changed to another character. We spent several hours going through the manuscript before it finally was ready to print out and mail in.

Posted by Richard I. Garber at 10:45 AM No comments: Links to this post

When should you stop rehearsing for a while?

The previous post about contests had me thinking more about rehearsing, which is always recommended as a way of overcoming stage fright. (Advice on how to rehearse appears in this previous post).

Before a contest it is tempting to rehearse repeatedly. When should you stop? At the Boise State University library I found a book by Stewart Gordon called Mastering the Art of Performance: a primer for musicians. Musicians have problems similar to contest speakers, so the book has a whole chapter on overcoming stage fright. On page 107 Mr. Gordon says that it is is time to “give it a rest” and pursue a diversion when you have any of the following symptoms:

“Your concentration becomes fuzzy and forced.

You are prone to making mistakes that you don’t usually make.
.
You become irritable or temperamental.

You feel physical pain as a result of tension (headaches, neck or back pain).

You are consistently getting results that you know are below par for your present level of ability.”

You can read most of this book chapter on stage fright by putting the keyword “diversion” in the "search in this book" box on the top right corner of the page at Google Books, and then choosing page 107.
Posted by Richard I. Garber at 6:21 AM No comments: Links to this post