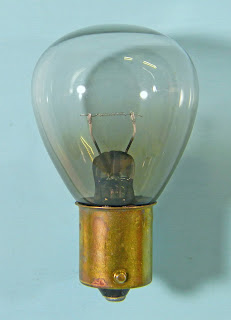 In Shark Tank at Computerworld on November 20, 2019 there was an article titled A real light bulb moment. It described troubleshooting of an IBM 3420 tape drive used for backup storage  of digital data on an IBM 370 mainframe computer in London back in the mid 1970s. That drive was not loading tape properly. The Wikipedia article on 9 track tape describes how this should work:

“To load a tape, an operator would remove the protective ring (frequently called a ‘tape seal belt’ because its purpose was to prevent humidity and dust on the media) from the outside of the tape reel and install the tape on the supply hub, then thread the tape leader through the various roller assemblies and onto the take-up reel, installing three or four winds of tape to provide enough friction for the take-up motor to be able to pull the tape. The operator then initiated an automatic sequence, often by a single press of a button, that would start the vacuum system, then move the tape forward until the beginning-of-tape (BOT) foil strip was detected by an optical sensor in the tape path. The control electronics would then indicate to the controlling computer that the unit was ready for operation.

The sensing of BOT and EOT [end-of tape] was achieved by shining a small lamp at the tape's surface at an oblique angle. When the foil strip (glued to the tape) moved past the lamp a photo-receptor would see the reflected flash of light and trigger the system to halt tape motion. This is the main reason that photographic flash cameras were not allowed in data centers since they could (and did) trick the tape drives into falsely sensing BOT and EOT.”

The lamp was not burned out, so obviously the problem seemed to be somewhere else. They replaced the electronics connected to the sensor, but that did not fix things. Eventually someone presumably Read The Fine Manual (RTFM) which you can find online. On page 87 it says to Check that fiber optics lamp is on. They already did that! But there were two other less obvious things in the checklists. Way back on page 187 it also says to Reposition fiber optic lamp bracket to improve light output. And finally, on page 84 it says Fiber optic lamp – discolored (check when off with pen light). It indeed was blackened, so they replaced it. Problem solved – the lamp simply wasn’t putting out enough light to trigger the sensor.

Why does a lamp blacken? The Wikipedia article on Incandescent light bulbs says the tungsten filament slowly evaporates and metal vapor condenses on the inner surface of the glass envelope. Halogen lamps reduce that problem by redepositing tungsten vapor back onto the filament surface.