You are not alone: fear of public speaking affects one in five Americans 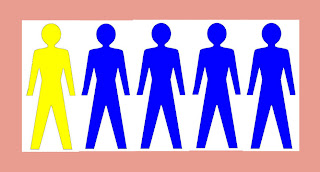 For people who are trying to improve their speaking skills, fear may be the most important factor influencing the decision to attend that first Toastmasters meeting. Where does fear of public speaking in the rank compared with fear of other social situations? Does it get the “gold medal” in the “Olympics of Fear?”

Some people still quote a survey of 3000 people from 1973 that was mentioned back in 1977 in the Book of Lists. However, there is a very large, but almost unknown, survey of the public which was published just last year. It is one result from a large ongoing mental health program called the National Comorbidity Survey (NCS). Their first survey of 8,098 people in the was conducted between 1990 and 1992, and results on social fears were published back in 1998.

About a decade later a second study called the National Comorbidity Survey – Replication (NCS-R) was conducted. This survey of 9,282 people was conducted between 2001 and 2003.

Data were analyzed, and those results on social fears finally were published in January 2008. You can read the entire article by A. M. Ruscio et al. here. Social fears are shown in the following bar chart: 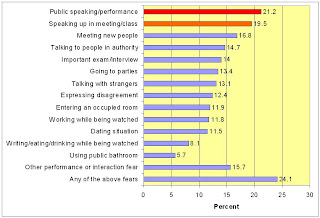 First, 21.2% reported a fear of public speaking/performance, which was larger than any of the other 12 specific categories. Second, 19.5% reported a fear of speaking up in a meeting/class which is a similar question answering situation that Toastmasters will recognize as the impromptu speaking portion of their meeting known as Table Topics. Only 11.5% feared a dating situation, so almost twice as many people feared public speaking as feared going out on a date. The lowest specific category was using a public bathroom, which was feared by just 5.7% of Americans.

Fear of public speaking is the most significant social fear for residents of the U.S. Fear of speaking up in a meeting or class is a very close second. Both affect about 1 in 5 Americans. Toastmasters, the best way to overcome both of those fears, remains the number one antidote. Don’t be snake bit – tell everyone how they can feel confident and competent behind and, yes, even in front of the podium.

Michael Kroth, PhD, ATM is an Assistant Professor at in Adult and Organizational Learning. He is the author of Career Development Basics, Transforming Work: The Five Keys to Achieving Trust, Commitment, and Passion in the Workplace, and The Manager as Motivator.

The above article is a revision of the article that appeared yesterday in the Summer 2009 issue of The Pulsebeat, the electronic newsletter for District 15 of Toastmasters International.

You step up on a podium and speak from behind a lectern. Most experienced speakers never know the difference.

In contemporary usage you can indeed stand behind a podium.

The American Heritage Dictionary, 3rd edition says the second meaning for podium is: “A stand for holding the notes of a public speaker; a lectern.”

In the Oxford English Dictionary (which you can read online at Multnomah County Library) the second meaning for podium is:
“A raised platform or dais at the front of a stage, room, hall, or auditorium; (now esp.) a small platform on which a person may stand to be seen by an audience whilst making a speech, conducting an orchestra, etc. Also in extended use (N. Amer.): a lectern; (also) a lectern-like desk at an airport departure gate.”

Webster’s Dictionary of English Usage (1989) says the use of podium to mean lectern already was standard twenty years ago.