Seeing what is not there – but should be 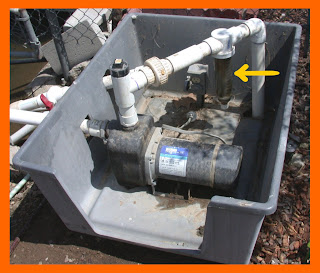 One of the hardest things about preparing a speech is the critical ability to step back, look hard, and see what is missing. It is easy to revise what you already have written. It is much harder to see else what should be there – but is not.

Are you missing something, like a stirring opening, a grand finale with a call to action, or a compelling story to support one of your main points?

A few weeks ago I got a lesson on this topic when I started up the drip irrigation system for our yard. It has a pump (inside a gray plastic dog house, as shown above) that draws water from a canal that runs through our backyard. There is a filter inside of a clear plastic jar (see the yellow arrow) located just past the pump. The outside of the jar has threads at the top, like a sturdier cousin of a jar for mayonnaise or peanut butter. It screws onto a white plastic lid glued into the PVC piping. Last season we had noticed that the filter was leaking a little. I tried tightening the jar then, but it still leaked. It was not serious because the water just ran on the ground and back into the canal.

This season I was determined to figure out why it leaked. First I unscrewed the jar and looked to see if there was a gasket on top of it. There was not. Next I got out a mirror and a toothpick to check if I could see or feel a gasket on the bottom of the white plastic lid. However, there was not one there either. When I looked more closely at the outer rim on top of the jar I saw a ledge, so I suspected that there should have been an O-ring (a black rubber donut) around there.

I took the jar and drove a couple of miles west to Grover Electric and Plumbing Supply. Their replacements had an O-ring seal sitting on that ledge. They also had separate replacement O-rings. I bought one and installed it. Now the filter no longer leaks.

Sometimes missing O-rings are VERY critical. Eastern Airlines flight 855 left for on the morning of May 5, 1983. The Lockheed L-1011 airliner was carrying 162 passengers and 10 crew members. After just a half-hour they had to turn back because the low-oil warning lights for all three jet engines went on. They landed in with only one engine running. Right after they landed the other two engines caught on fire. Fortunately no one was injured or killed, but it was a very near miss.

An NTSB investigation revealed that the magnetic chip detectors for the oil systems (as shown below) on all three engines had been installed without a pair of O-ring seals. Previously a maintenance supervisor always had given the mechanics the chip detectors with the O-rings already added.

Apparently they stored the chip detectors in their parts bins without the O-rings, because the rubber has a limited shelf-life. That day the mechanics went to the parts bins and got the detectors themselves. They did not realize that those two seals were missing, and proceeded to install them on all three engines. 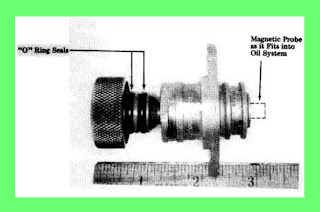