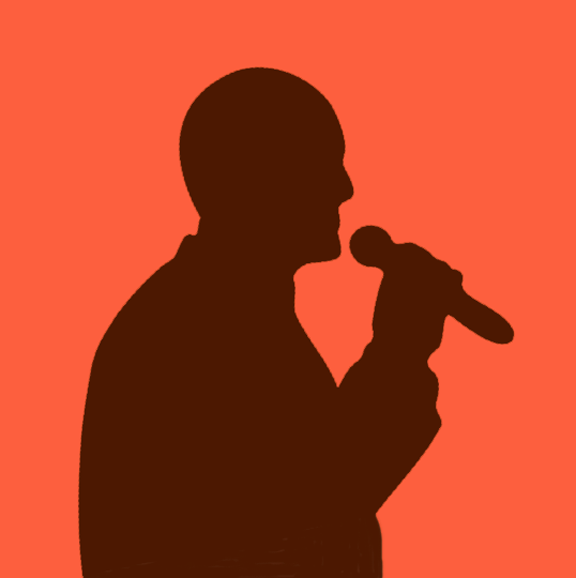 For years I’ve been reading and hearing claims that around three-fourths of people in the world fear public speaking. A web page from the Yale Teaching Center said that:

“It is estimated that 75% of of all people suffers from some degree of glossophobia, or fear of public speaking.”

Some said that statistic came from either the National Institute of Mental Health (NIMH), or even the World Health Organization (WHO).

In a July 2012 blog post I noted that the NIMH claim was bogus, but those sort of percentages had been reported decades ago by James C. McCroskey and his colleagues. On page 4 of the 2nd edition of Deanna D. Sellnow’s book, Confident Public Speaking (2005) she said that:

“Surveys report that 70 to 75% of the adult population fears public speaking (McCroskey 1993; Richmond and McCroskey 1995)."

Two days ago I discussed Sellnow’s second reference (about the 70%).

Sellnow’s first reference (about the 75%) was to page 35 in the 6th edition of James C. McCroskey’s book, An Introduction to Rhetorical Communication, which says that:

“A nationwide survey revealed that the primary fear of Americans is the fear of giving a public speech (Ref. 1). Even the fear of death came in a poor third. In his extensive work at Stanford University, P. G. Zimbardo found that three out of every four college students, like other Americans, have a very great fear of public speaking (Ref. 2). The present author’s research, involving over 50,000 college students and other adults in various parts of the United States, strongly supports Zimbardo’s findings. Stage fright, the fear of speaking in public, is experienced by an overwhelming majority of people in this society.”

The Boise State University library just had the 1972 edition of McCroskey’s book from 1972. Eventually I found the 6th edition at the College of Southern Idaho’s library over in Twin Falls. Sometimes I will go to great lengths (130 miles) to track down information for this blog.

McCroskey’s first reference was to What Are Americans Afraid Of? The Bruskin Report,  No. 53, 1971 (sic). I have discussed that 1973 survey at length in the most popular post on this blog.

McCroskey’s second reference was to page 37 of Philip G. Zimbardo’s 1977 book, Shyness: What It Is and What to Do About It. Page 3 of the book mentions that his first survey about shyness was administered to nearly 400 students, and then nearly 5000 people completed a  second, revised shyness survey. 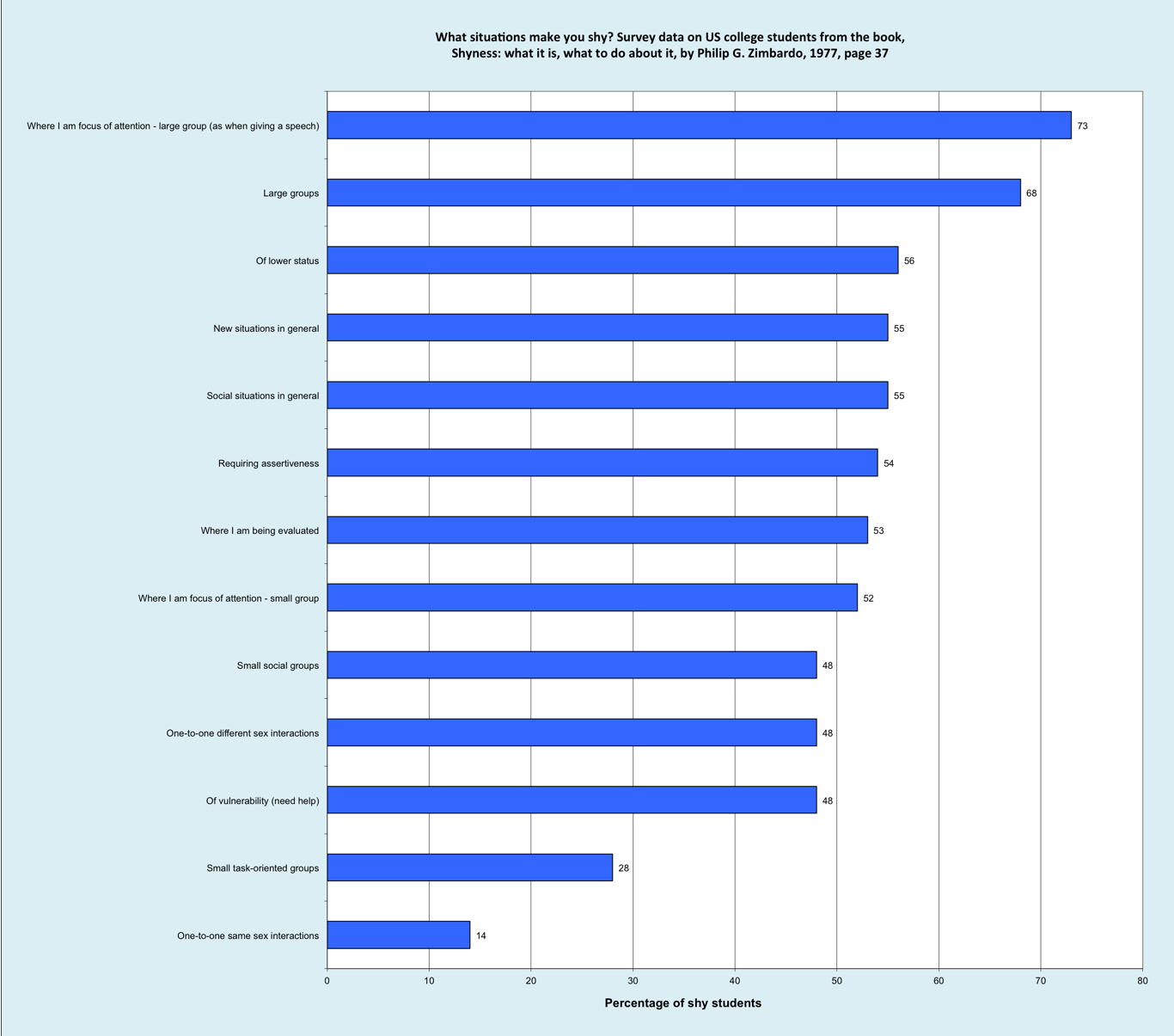 The top of  page 37 has a table headed What makes you shy?, listing the Percentage of shy students in two categories headed Other People and Situations. Results for all 13 situations are shown above in a bar chart (click on it to see a larger, clearer version). The most common situation was Where I am focus of attention - large group (as when giving a speech) - 73%. Only 52% of students were shy where they were the focus of attention in a small group. For one-to-one interactions, 48% were shy with the different sex, versus only 14% with the same sex. 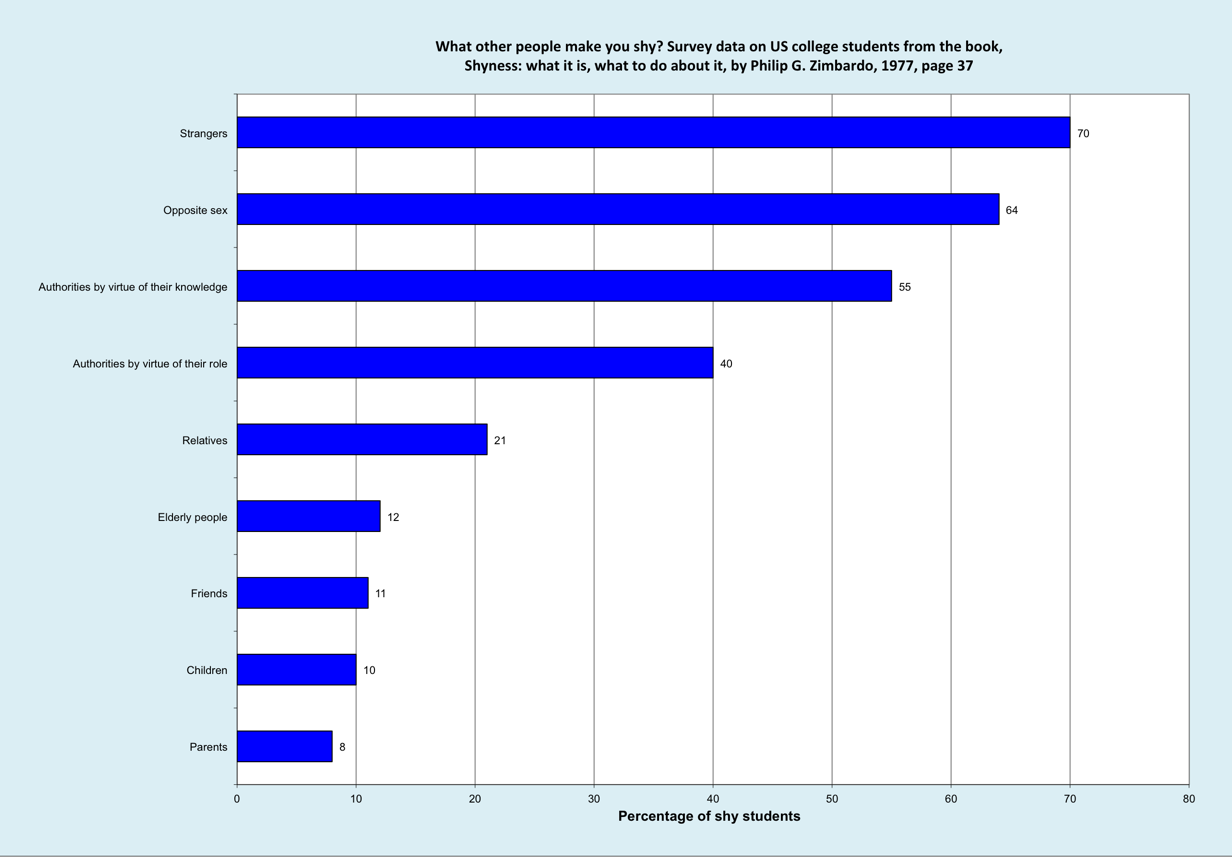 Results for Other People are shown above in another bar chart. Strangers (70%) made the most students shy. 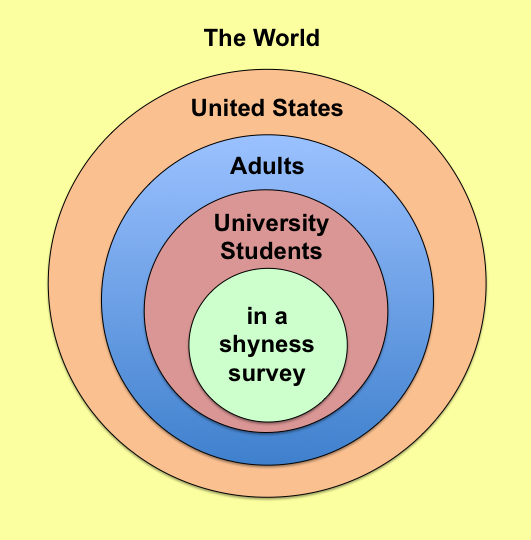 So, the 73% statistic (rather than the mythical 75%) really covers a broader situation but for a much smaller group than you might have expected. The source is from back in 1977, the same year as The Book of Lists. Curiously, I’ve don’t recall seeing Zimbardo’s list of those 13 shyness inducing situations mentioned by any public speaking coaches, who constantly mention parts of the one in the Book of Lists. 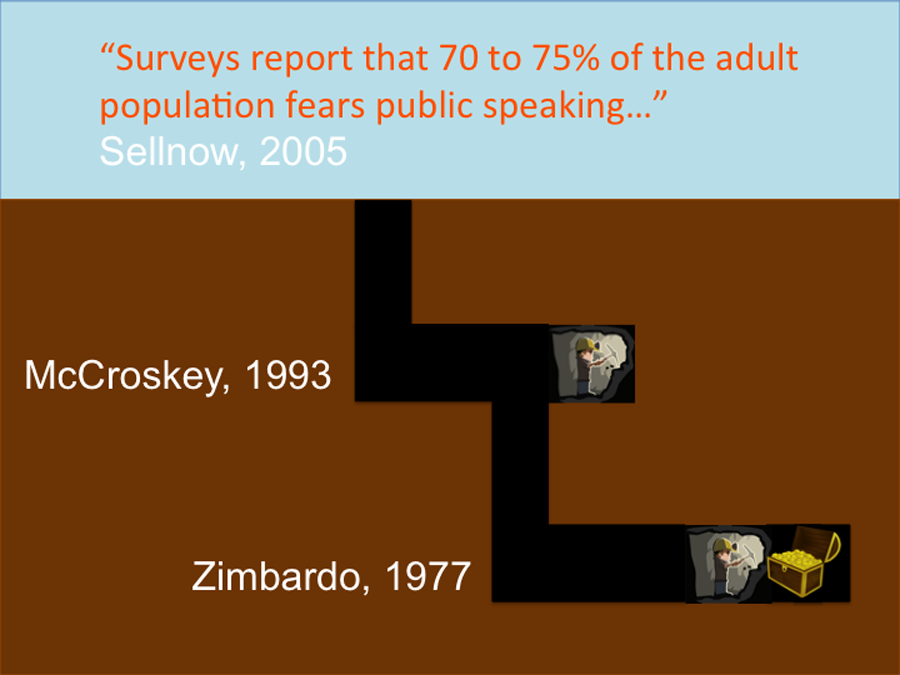 To find out where that myhical 75% statistic really came from I had to get off the computer, visit two different university libraries, and have my public library request one book via interlibrary loan. Most speech coaches don’t make that kind of effort, but in a 2012 blog post titled On a Tightrope: 5 Signs You Suffer From “Hidden” Stage Fright and a 2013 one titled To Increase Your Influence, Learn to Love Public Speaking Gary Genard referred to Karen Kangas Dwyer’s 1998 book Conquer Your Speechfright, which might reference the same two books as Sellnow did.

Last November I blogged about some more recent statistics that should be quoted instead of that mythical 75%.