What social situations scare American adolescents, and what are their top 20 fears?

Last year there was a magazine article that answered the first question conclusively. It discussed some of the results from a national survey acronymed as the NCS-A. The article by Jennifer G. Green et al. titled “Validation of the diagnoses of panic disorder and phobic disorders in the US National Comorbidity Survey Replication Adolescent (NCS-A) supplement”, and appeared in the International Journal of Methods in Psychiatric Research (Volume 20, No. 2, pages 105 to 115). You can read an abstract here, or find the full text here.

The NCS-A was a face-to-face mental health survey of over 10,000 U.S. adolescents with ages from 13 to 17. It was done between February 2001 and January 2004. Not everyone completed the survey, so there were 7682 responses in the first column of Table 4 of that article. 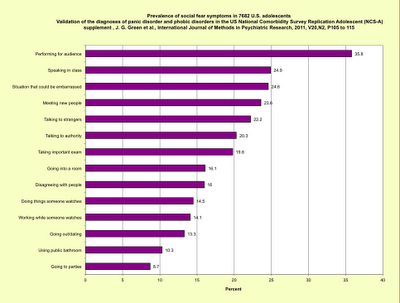 The bar chart shown above list the results for what percent feared 14 different social situations. (Click on it for an enlarged version). Performing for an audience (35.8%) was first, followed by speaking in class (24.9%). Generally more adolescents feared performance situations than interaction situations.

What about specific fears, like heights, flying, and closed spaces? Those have not been analyzed in detail yet. However, data from the screening questions SC27A to 27F of the NCS-A is online. 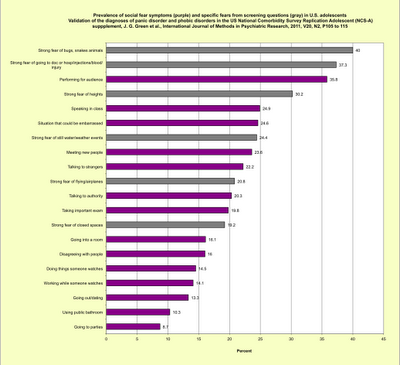 Another bar chart adds those results (gray bars) to those from the Green et al article to produce a list of 20 fears, similar to what I did before with the National Comorbidity Survey-Replication (NCS-R) to make a list of 20 fears for a new millennium. Two of those specific fears have higher percentages than performing in public. So, as I discussed back in January, public speaking isn’t the greatest fear.

The image of James Dean as a troubled 17-year-old came from the trailer to the 1955 film Rebel Without a Cause at Wikimedia Commons.
Posted by Richard I. Garber at 2:57 PM

Fear of public speaking would definitely be on the bottom of my list and the fear of losing a loved one on the top.

I certainly don't trivialize any fear even if it sounds silly. It is very intense and real to someone.

Thanks for commenting, and good luck with your new All Things Presentation blog.

You commented on my speech class blog RockSpeechClass.net that no one has ever done a survey about the fear of public speaking.

I thank you for the updated information. I was not aware of this study; in fact, the data I found several years ago - probably prior to this survey - was that the previous claim was made up by the list builders in 1973.