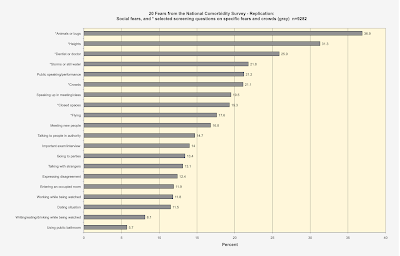 The perennially cited survey of The 14 Worst Human Fears in the 1977 Book of Lists is embarrassingly ancient. That data really came from a 1973 Bruskin survey, so this year they are 38 years old. They literally are a half-truth, because the median age reported in the 2010 US Census was 37.2 years. That is, half the current population weren’t even around when Bruskin asked their questions.

What should replace that survey? Results from the National Comorbidity Survey Replication (NCSR), as are shown above in a bar chart. Click on it to see a larger and clearer version. Animals or bugs tops the list, followed by heights, the dentist or doctor, and storms or still water. Public speaking/performance came fifth, just above crowds, and speaking up in a meeting/class was seventh.

In January 2008 A. M. Ruscio et al published an article on "Social Fears and Social Phobia in the United States: Results from the National Comorbidity Survey Replication." I posted a bar chart of those social fears in this blog on June 23, 2009. The NCSR was conducted between 2001 and 2003, so it’s about thirty years newer than the Bruskin survey. The NCSR results in that article described 13 social fears, but did not include other common specific fears like heights, flying, and closed spaces.

People clearly are fascinated by lists of fears. Not having those specific fears in a list now seems like being served a regular hamburger after getting used to a deluxe double version - perhaps a McDonald’s Big Mac or a Big Boy. (I suppose the British equivalent would be being served fish without chips). Were those fears included in the NCSR? Of course they were, they just were not analyzed in that particular article. In fact, I couldn’t even find another published article about specific fears, like I did in July with the NCS. Psychologists and psychiatrists must have better things to do than providing lists for use by speaking coaches and speech teachers, but I’m not either.

So, I decided to find the specific fears results in the raw data, and then add it to the social fears to make a more comprehensive list and bar chart. Raw data from the NCSR is included in a series of studies collectively known as the Collaborative Psychiatric Epidemiology Surveys (CPES). The data are on a web site, although it’s a bit of a labyrinth to navigate. You can find both the questions asked and the answers, so the surveys really are quite transparent.

The specific fears are in six screening questions: SC27a through SC27F, and fear of crowds is in a seventh, SC30. The data show a “valid percent” which ignores a few confused individuals in the sample of 9,282 people who answered don’t know - rather than yes or no. 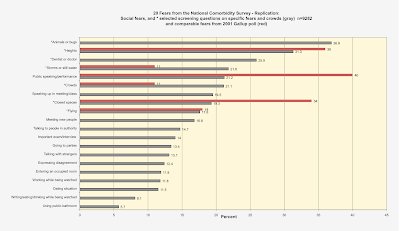 How do the results for similar questions compare? Six of them are shown above in another bar chart. For flying there was an almost perfect match - 18% for Gallup and 17.6% for the NCSR. For heights Gallup found 36%, while the NCSR found 31.3%.

For public speaking the surveys asked somewhat different questions. Gallup asked about “public speaking in front of an audience” - and found 40%. The NCSR asked about both “acting, performing, or giving a talk in front of an audience” (21.5%) and
“speaking up in a meeting or class? (19.5%). If you add those two percentages, you will get 40.7%, which would agree with the 40% reported by Gallup. The NCSR also had a screening question, SC29a, about “giving a speech or speaking in class” which was feared by 38.5% of the sample.

If you want to force fear of public speaking back up to being number one, than you can make up your own bar chart using the NCSR screening question, or add the two previously mentioned results (40.7%). I can see no reason for omitting that carefully made distinction, unless we’re comparing raw data with another CPES survey. However, that’s a story for another day.
Posted by Richard I. Garber at 2:49 PM