How many Americans are scared of networking situations? An infographic showing both fears and phobias for meeting new people and talking with strangers 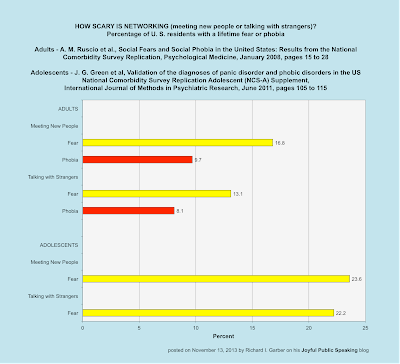 The infographic shown above is based on two recent and very serious magazine articles reporting on large surveys of U.S. adults and adolescents. (Click on it to see a larger, clearer view). Both surveys asked two questions related to networking - about meeting new people and talking with strangers.

The first article by A. M. Ruscio et al. is titled Social Fears and Social Phobia in the United States: Results from the National Comorbidity Survey Replication. You can read the full text here. I blogged about it back in October 2011 in a post titled What’s the Difference Between A Fear and A Phobia? That post also contains a bar chart for all the fears and phobias shown by Ruscio et al. in their Table 1.

The second article by J. G. Green et al. is titled Validation of the Diagnoses of Panic Disorder and Phobic Disorders in the US National Comorbidity Survey Replication Adolescent (NCS-A) Supplement. You can read the full text here. I blogged about it back in June 2012 in a post titled What Social Situations Scare American Adolescents, and What Are Their Top 20 Fears? That post also contains a bar chart for all the fears shown by Green et al. in their Table 4.

For adults, meeting new people was feared by 16.8%, and talking with strangers was feared by 13.1%. Where do these fears rank compared with other social situations? Meeting new people was ranked third, and talking to strangers was seventh. Public speaking/performance was first (21.2%), followed by speaking up in a meeting/ class (19.5%). Talking to people in authority (14.7%) was fourth, an important exam/interview (14.0%) was fifth, and going to parties (13.4%) was sixth.

For adolescents, meeting new people was feared by 23.6%, and talking with strangers  was feared by 22.2%. Where do these fears rank compared with other social situations? Meeting new people was ranked fourth, and talking to strangers was fifth. Performing for an audience was first (35.8%), followed by speaking in class (24.9%), and a situation that could be embarrassed (24.6%).

How do these survey results for adults compare with some statistics cited in books by networking experts? Back in 2005 Debra Fine published The Fine Art of Small Talk. On page 19 of that book she said:

“Do you know the biggest social fear in America? It’s public speaking. And do you know the second? It’s fear of starting a conversation with a stranger. So remember when you walk into a luncheon or a cocktail party, most people there are scared to death to talk to you.”

I’m not sure where she got that ranking, but second is a lot higher than seventh (for talking with strangers). In an article about her book in the Houston Chronicle on December 1, 2005 she was quoted as saying that five out of eight of us (62.5%) are afraid to talk to strangers. The 13.1% shown above in the infographic is about 4.8 times smaller than her statistic.

In 2010 Frances Kay published Successful Networking. On page 43 of her book (and page 22 of her 2004 book Brilliant Business Connections) she said:

“Don’t worry if you have butterflies; research shows that over 90 per cent of people feel fear about walking into a room full of strangers.”

This year Signe A. Dayhoff published her How to Speak Without Fear Small Talk Course, in which she said:

“However, a survey done in the 1980s showed that up to 95 percent of the U.S. population reported that it was truly uncomfortable talking with strangers.”

These percentages are almost ludicrously high compared with those reported by Ruscio et al. The last column of Table 1 in that article reports percentages of fear for people with a diagnosis of social anxiety disorder, which were 80.5% for meeting new people and 66.7% for talking with strangers.
Posted by Richard I. Garber at 1:33 PM