How scary is public speaking or performance? A better infographic showing both fears and phobias

Back on March 11th Miami Public Speakers posted a web page containing a Fear of Public Speaking Infographic (shown above). It’s very pretty, and has been reposted elsewhere many times. However, it was based on bogus statistics (which I have crossed out in yellow) so it is not very meaningful. Also it uses the silly pseudo-technical term glossophobia. 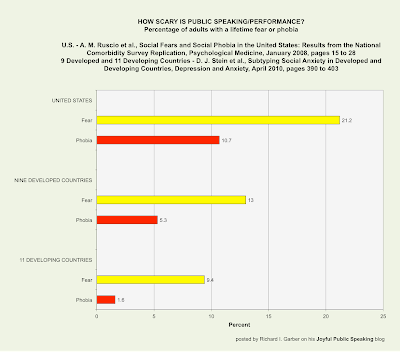 A bar chart in my better infographic shown above is more useful since it is based on two recent and very serious magazine articles. (Click on it to see a larger, clearer view). For adults, they show the percentages for both fear and phobia of public speaking/performance in the United States, nine developed countries (Belgium, France, Germany, Italy, Japan, Netherlands, New Zealand, Spain, and the United States) and eleven developing countries (Brazil, Bulgaria, China, Colombia, India, Lebanon, Mexico, Nigeria, Romania, South Africa, Ukraine). For U.S. adults, 21.2% have a fear and only 10.7% have a phobia, both of which are drastically lower than the 74% shown in the Miami Public Speakers infographic.

The first article by A. M. Ruscio et al. is titled Social Fears and Social Phobia in the United States: Results from the National Comorbidity Survey Replication. You can read the full text here. I blogged about it back in October 2011 in a post titled What’s the Difference Between A Fear and A Phobia? That post contains a bar chart for all the fears shown by Ruscio et al. in their Table 1.

The second article by D. J. Stein et al. is titled Subtyping Social Anxiety in Developed and Developing Countries. You can read the full text here. I blogged about it back in August 2012 in a post titled Surveys show that public speaking isn’t feared by the majority of adults in nine developed and eleven developing countries. That post contains a pair of bar charts for all the fears shown by Stein et al. in their Table 2.
Posted by Richard I. Garber at 5:36 PM

Thank you for making the effort to provide some accurate information--most appreciated. Especially appreciated with the huge focus on alternate facts, etc.