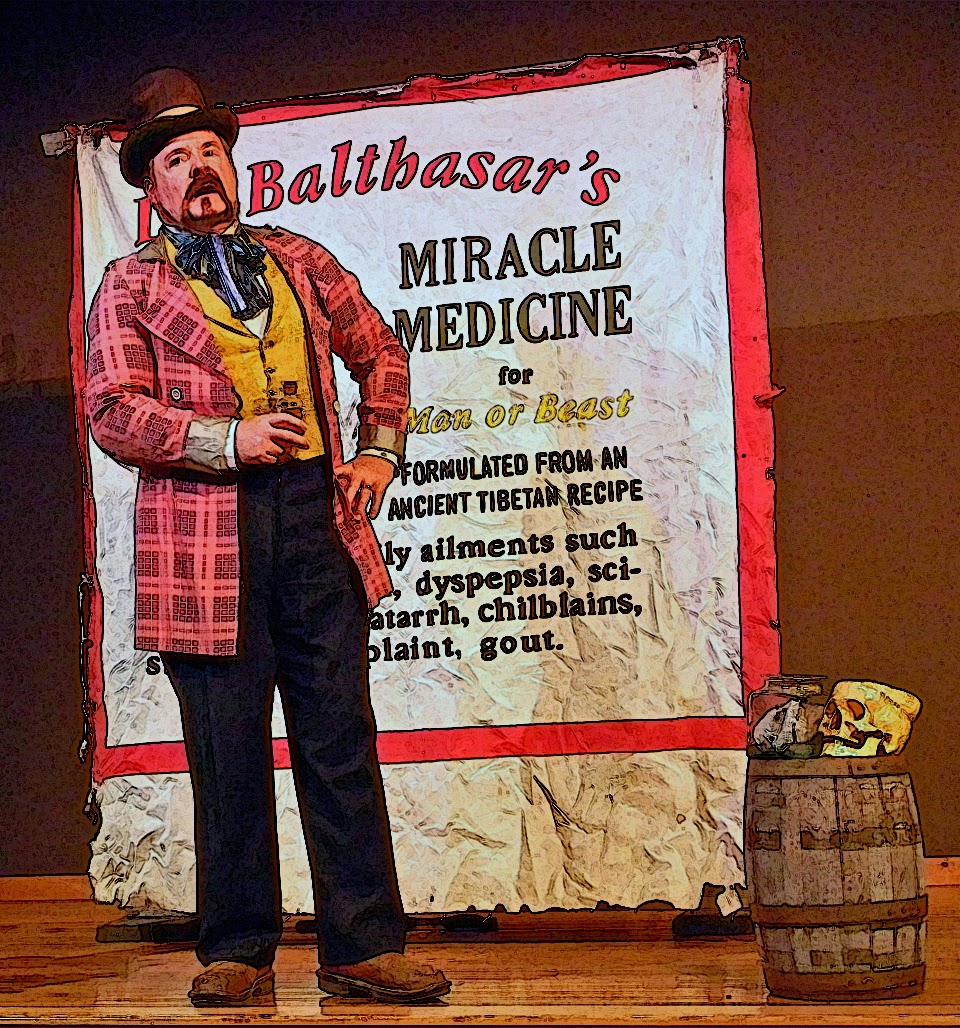 You might want to open a speech with a startling statistic, and you could do a quick web search to find one.

Are you looking for a way to get amused rather than informed? Are you tired of reading fear news from The Onion, or hearing fairy stories at Coast to Coast AM? Just head over to the Statistic Brain web site, who claim on their Cite Statistics page that you should grandly refer to their stuff as being from Statistic Brain Research Institute, publishing as Statistic Brain. You will find startling statistics there. Are they real? Are they up to date? Did they just make them up? Sometimes it is hard to tell. It’s just like going to an old time medicine show.

Back in the March 2014 issue of Information Today there was a database review article by library director Mick O’Leary titled Statistics Sites Good and Bad. (You can find the full text in an EBSCO database like MasterFILE Premier at your friendly local public library.) One of his section headings is Statistic Brain: Do Not Use, and he grumbled:

“Statistic Brain is thin, erratic, out-of-date, and full of errors. If you come across it, immediately shift over to Statistica, or indeed to any other statistics purveyor.

....Statistic Brain is full of errors. Some are minor: Statistic Brain states that there is a large oil company named Exon and a city in eastern Pennsylvania named Redding. Others are serious: According to Statistic Brain the U.S. has the world’s second largest GDP.

Each individual statistics record has a data table, with a source and release date...most of the time, that is, since this essential fact is sometimes omitted. The source information does not link to the original.”

Statistic Brain sometimes has out of date statistics, vaguely identified sources that can’t be verified, and even internal inconsistencies (and nonsense). Here are three examples from specific pages there. 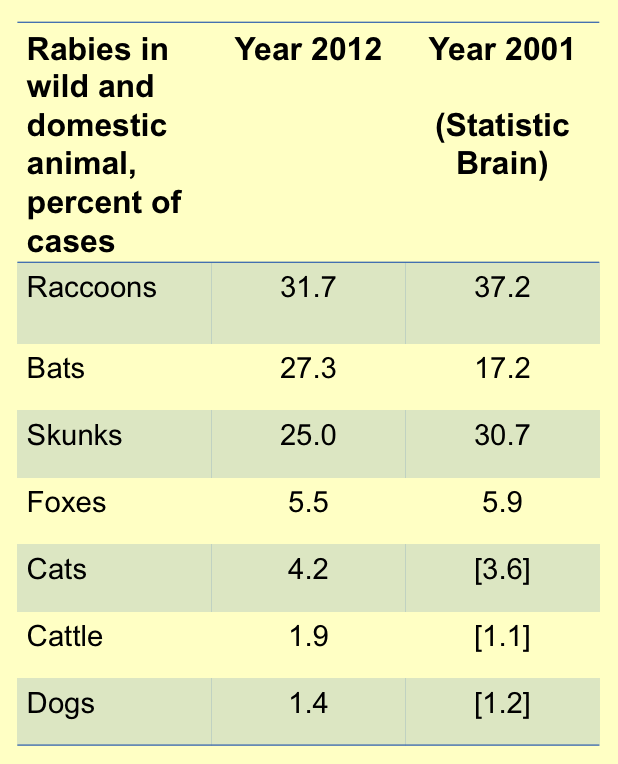 The Rabies Virus Statistics page at Statistic Brain says their source was the Center for Disease Control, which actually is called the Centers for Disease Control and Prevention (CDC), and the research date was July 12, 2014. The second part of their table is headed Rabies in Wild Animals. You might assume that they used the latest CDC data, since they checked just this summer. But the data they listed actually came from an article titled Rabies surveillance in the United States during 2001. That basic title is used for a whole series of annual articles. The CDC publications page on rabies has links to the full text for an entire decade of those articles covering 2002 through 2012. The table shown above compares the 2012 CDC statistics with the 2001 statistics listed at Statistic Brain. Bats flew up from 17.2% to 27.3%, and from third place to second place.

The Attention Span Statistics page at Statistic Brain says their sources were the National Center for Biotechnology Information, the U.S. National Library of Medicine (NLM), and The Associated Press, and their research date was January 1, 2014.

Those three Nebulously Authoritative Places (NAP) may be meant just to put your critical instincts to sleep. National Center for Biotechnology Information is the folks at NLM responsible for databases like PubMed. PubMed contains over 24 million citations or abstracts of magazine articles and other sources. That’s a huge haystack, so it can be very hard to determine if something really came from there. (Earlier versions of that Statistic Brain page only had listed The Associated Press as their source).

The first half of their table shows attention span statistics from those vague sources, which includes human attention spans of 12 seconds in 2000, 8 seconds in 2013, and 9 seconds for a gold fish. Back in April Ken McCall tried to find the goldfish data and couldn’t. 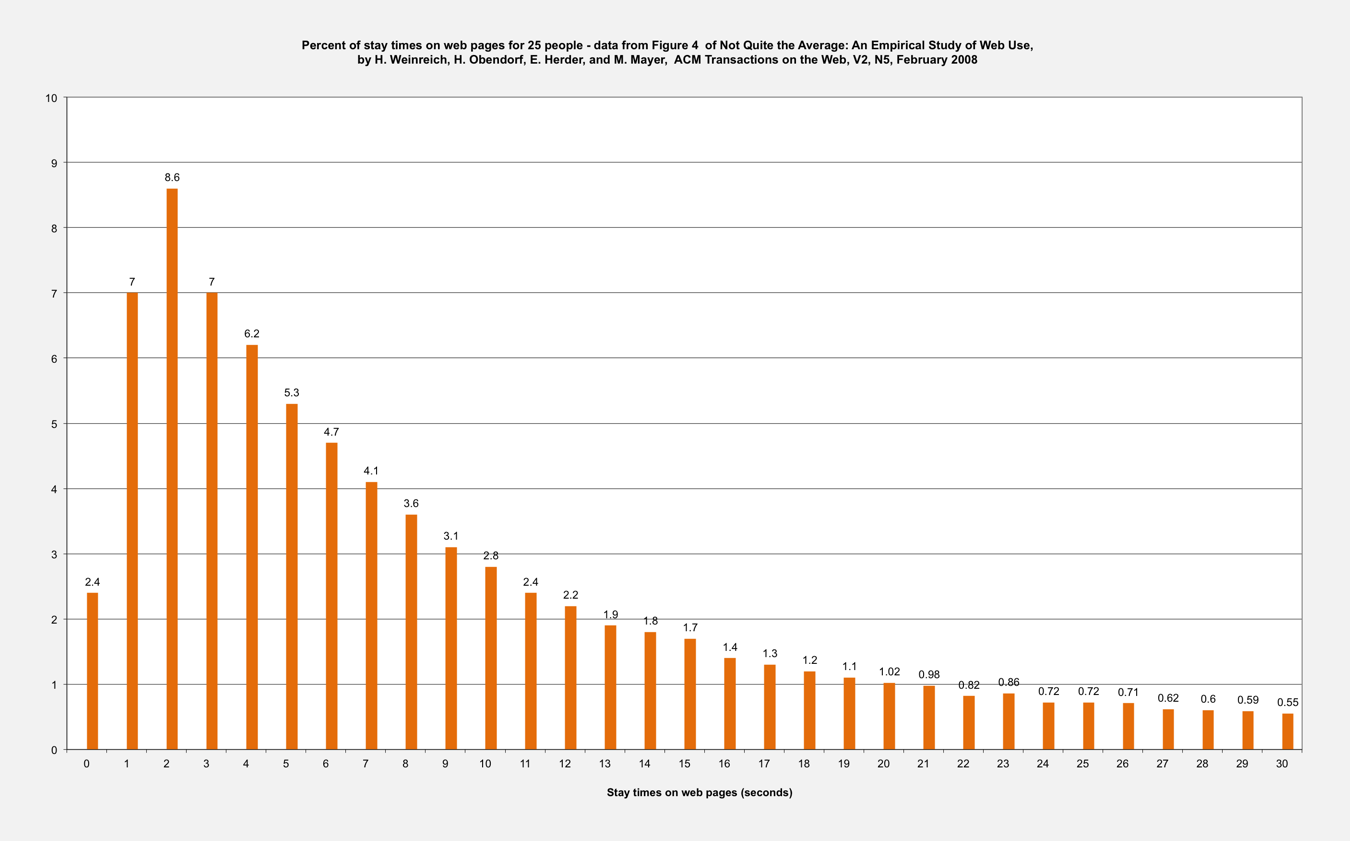 The second half of their table shows internet browsing statistics from a magazine article by H. Weinreich et al, which I’ve blogged about recently. The median was 9.4 seconds, so we really are about even with goldfish. But, the histogram (shown above) has such long tails that the alleged drop from 12 to 8 seconds likely would be insignificant.

The Fear/Phobia Statistics page at Statistic Brain says their source was the National Institute of Mental Health, and the research date was July 8, 2014. The lower half is a Top Phobias list (really a fears list). Back in 2012 I blogged about how it was just A bogus list of top ten phobias. They didn’t give a clue about where that list really came from. 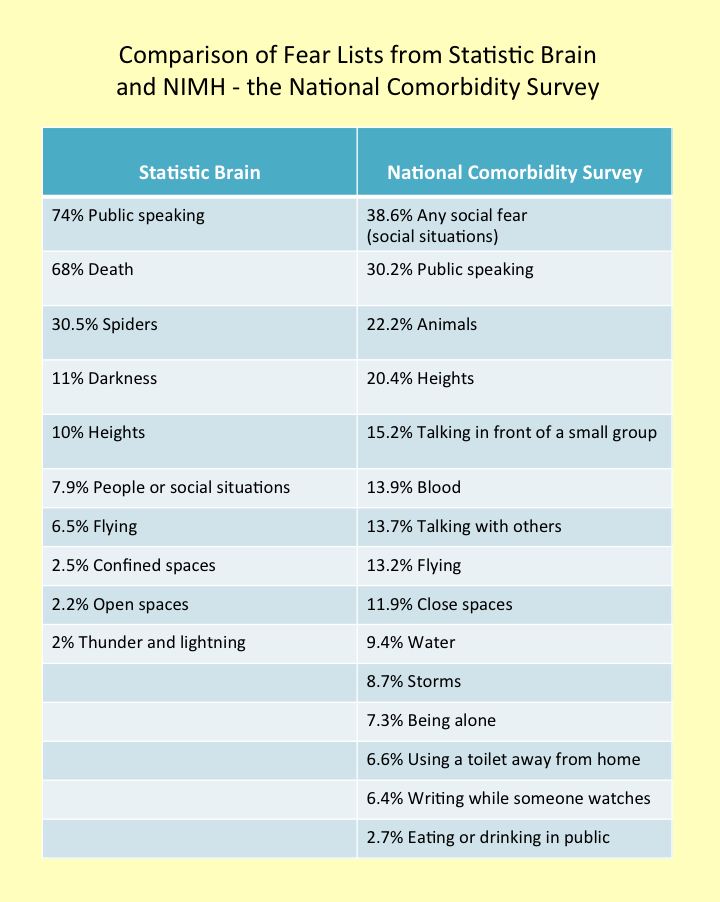 I previously blogged about Putting the fear puzzle pieces together: social and specific fears in the National Comorbidity Survey. That mental health survey was sponsored by the National Institute of Mental Health. As shown above, there is a crucial difference between that list and the one at Statistic Brain. Social fears are a broader term, so a larger percentage (38.6%) fears them than fears public speaking (30.2%). The list at Statistic Brain inconsistently shows 74% fear public speaking and only 7.9% fear people or social situations. 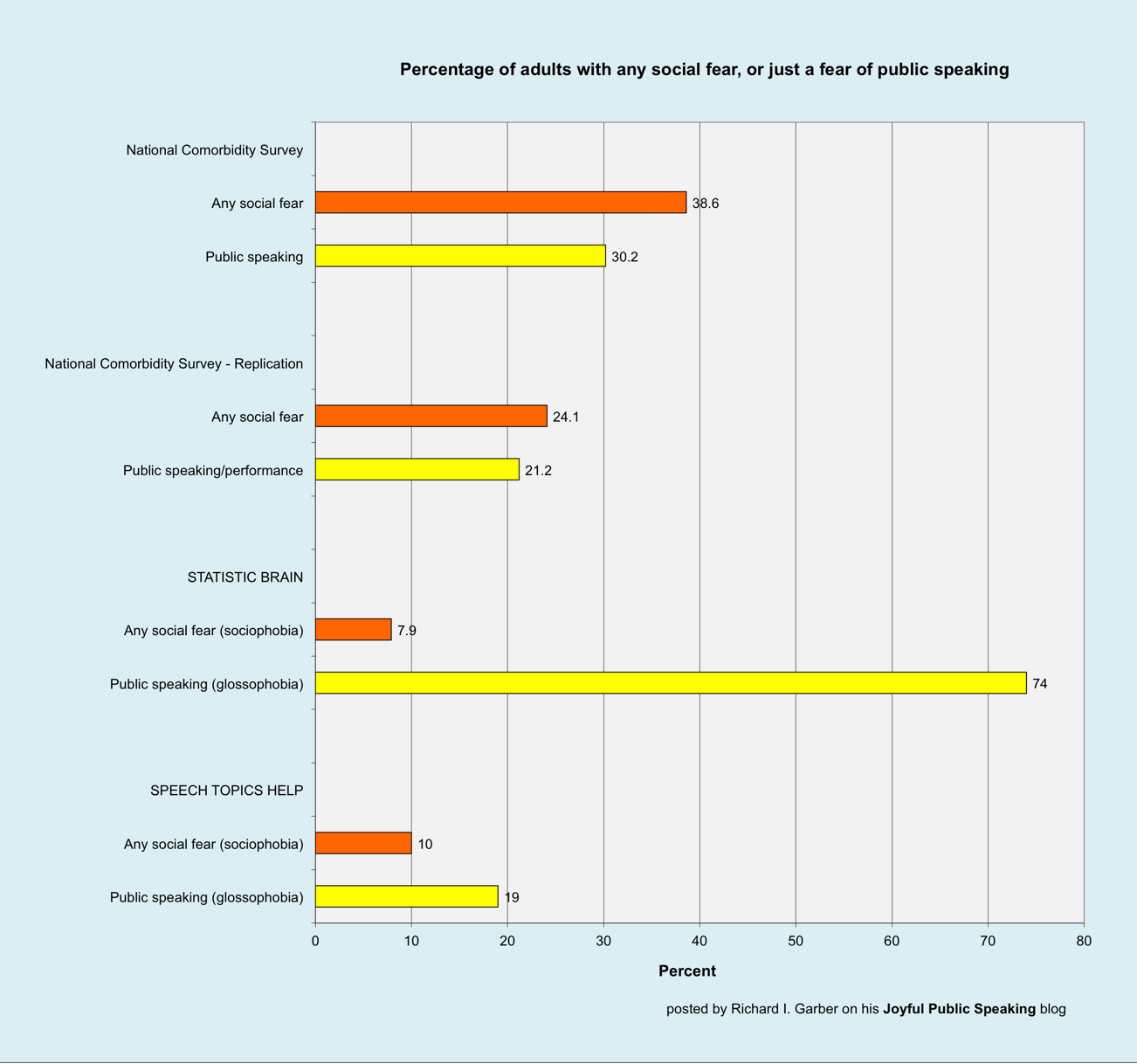 As shown above in a bar chart, the more recent National Comorbidity Survey - Replication also shows social fears are a broader term, so a larger percentage (24.1%) fears them than fears public speaking (21.2%). Another fears list on a page at the Speech Topics Help web site has the same problem Statistic Brain does. 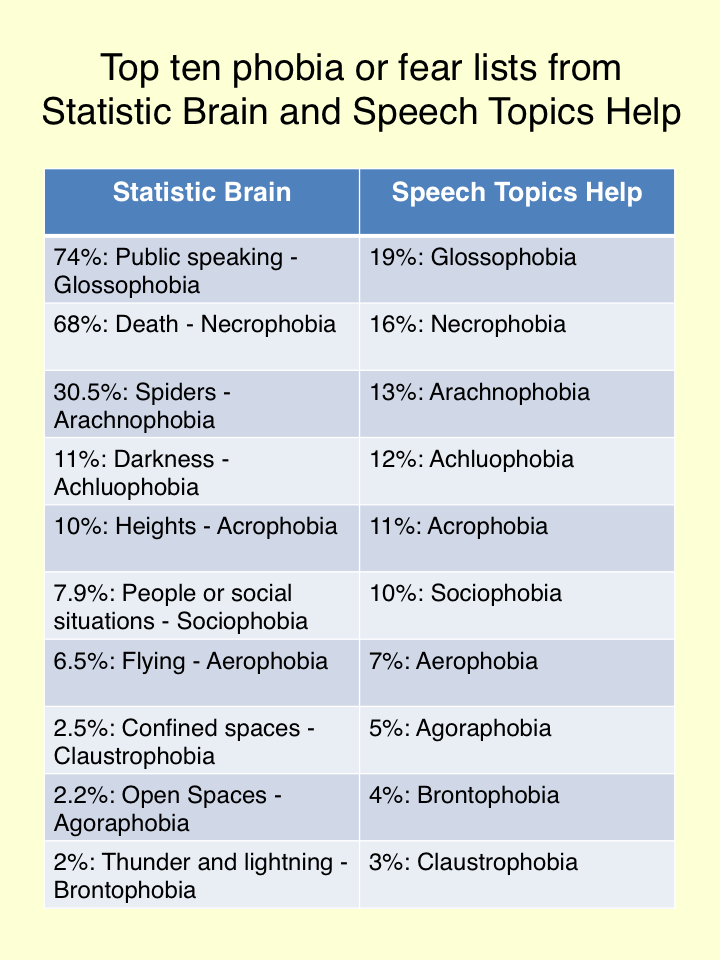 As is shown above, the Speech Topics Help web page lists the same top ten as Statistic Brain does, with the first seven in the exact same order. The percentages on that page are shown in a pie chart. Since they must add to 100% the top three are quite a bit lower than those at Statistic Brain. Where did Statistic Brain get their percentages? I don’t know, and neither do you. So, please don’t quote their numbers as having come from the National Institute of Mental Health.

I forgot to mention that  on February 6, 2014 I had emailed NIMH Info to ask about the Fear of Public Speaking Statistics and Fear/Phobia Statistics pages at Statistic Brain.

The reply from the NIMH Information Resource Center began as follows:

You requested assistance refuting or confirming statistics on the prevalence of various phobias from the Statisticbrain.com website.  The statistics you are asking about did not come from the NIMH."