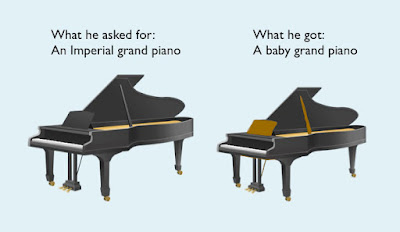 I just saw a TEDx Global London talk by Tim Harford titled How messy problems can inspire creativity. His first example is Keith Jarrett’s famous January 24, 1975 Köln Concert. That improvised solo piano jazz performance is a best selling CD (over 3.5 million copies), and one of my favorites. A Wikipedia page and another page at grammy.com have more details. You can listen a YouTube audio of the first part from that concert.

The concert was scheduled to begin at 11:30 PM, after a regular performance at the Cologne opera house. 1400 people still showed up. Keith hadn’t slept for almost 24 hours, he was wearing a brace because his back hurt, and he hadn’t eaten much of a hasty restaurant dinner.

Mr. Jarrett had requested a Bösendorfer Imperial Grand piano - their largest and loudest model. Instead by mistake the opera house had set out a worn-out baby grand in terrible shape. They used that one only for practice. It was barely capable of producing enough volume to fill the opera house:

“I went onstage and realized, ‘Hey, I have a Bösendorfer here and it's not the right size and it sounds like a modified electric harpsichord.’ And then we found out that they couldn't get the right piano, even though it existed, because their rental truck was gone.”

But the recording equipment already was set up. So he sat down and played for an hour and seven minutes:

“It just seemed like everybody in the audience was there for a tremendous experience, and that made my job easy. What happened with this piano was that I was forced to play in what was - at the time - a new way. Somehow I felt I had to bring out whatever qualities this instrument had.

Even if things go wrong, a good speaker still should be able to improvise a successful presentation. Back in 2012 I blogged about Surviving presentation problems with visual aids. I described how Lord John Butterfield once was supposed to speak on the history of medicine to a student audience at Cambridge University. The man setting up the slide projector tripped on the cord, the bulb broke, and slides were scattered far and wide.

“It seems we have lost our slides,” he said. “But, no matter, let me tell you about these people without their pictures.”

And then he did, calmly, briefly and clearly - based on knowing his topic very well.

Great story, Richard, Thanks for sharing!