Tone deaf writing about fears of pandemic and public speaking 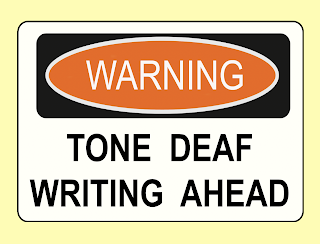 In this time of pandemic, we might hope public speaking experts would quit making their tired old claims that public speaking is our great (or even our greatest) fear. Ignoring fear of the pandemic is both tone deaf and arrogant.

On May 4, 2020 at Decker Communications there was a blog post by Ben Decker titled Fear which annoyingly left off pandemic but said that:

“Public speaking is even more terrifying than shark attacks or fear of heights for most people.


Some context: It’s well-known that ‘public speaking’ has always been a fear for most people. It’s considered the #1 fear on some lists, even more terrifying than shark attacks or fear of heights.” 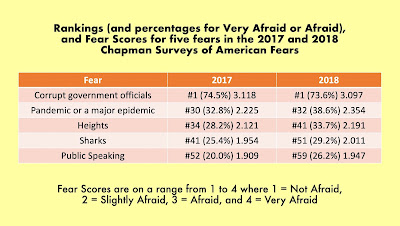 There is data from the 2017 and 2018 Chapman Survey of American Fears that covers this topic. As shown above in a table, rankings based on Fear Scores do not support Decker’s claim and neither do rankings based on percentages (for Very Afraid plus Afraid). Pandemic or a major epidemic outranks heights, which outranks sharks, which outranks public speaking. (Corrupt government officials came way first). Public speaking isn’t terrifying – based on the Fear Scores the average level of fear is just below Slightly Afraid. Back on October 29, 2017 I blogged about What do Americans fear most? Fear Scores from the 2017 Chapman Survey of American Fears.
Another second recent bad example is a 9-1/2 minute YouTube video posted on April 6, 2020 by Stan Phelps titled How to be loud and clear when presenting (Book preview of Silver Goldfish) in which he states:

“…And let’s start with the problem. Here’s the problem. Speaking and presenting is our number one fear as human beings. In fact it’s greater than the fear of dying.”

As far as I know there never has been a fear survey of all human beings (our whole planet). What we have instead is some national surveys. Stan has both an MBA and a JD, and has the Certified Speaking Professional credential from the National Speakers Association. His bogus widening of  the scope is NOT what you would expect from a professional.

A third example is an article by Ryan Jenkins at Entrepreneur on April 1, 2020 titled Why you fear public speaking and how to overcome it which opened by claiming:

“Public speaking continues to be a top fear of humanity.”

He linked to another article by Glenn Croston at Psychology Today on November 29, 2012 titled The thing we fear more than death.

Back in 1973 a polling firm in New Jersey did a survey about fears in the U.S. that was described far away (London) in a newspaper article, and eventually wound up being published in 1977 in a trivia collection called The Book of Lists. In 1992 comedian Jerry Seinfeld had a comedy routine very loosely based on it. The second most popular post at this blog was back on October 27, 2009 and titled The 14 Worst Human Fears in the 1977 Book of Lists: where did this data really come from? Note that sickness (18.8%) barely outranks death (18.7%) but never gets talked about.