Effort and an asymptote 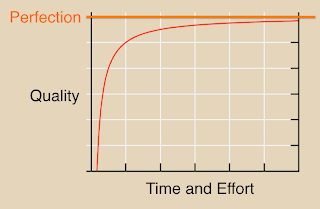 One of the blogs I enjoy reading is John Zimmer’s Manner of Speaking. On February 13th he blogged about how Perfect Public Speaking is an Asymptote. An asymptote is a line that a curve approaches as a limit. With continued effort the quality of your speaking will approach perfection, yet never achieve it. That’s a powerful idea.

Unfortunately John used the entire Wikimedia image of a hyperbola to illustrate that idea. That’s the graph for y = 1/x, and it doesn’t quite work as an illustration. It is what Russ Howser a month earlier called the Almost Right Image. Russ applied the same Mark Twain quote that John had used earlier about words. I’ve used it too.

The graph shown above was created by taking the lower left branch from that hyperbola, flipping it over, and labeling the axes and the perfection asymptote. Now the image really fits the concept. 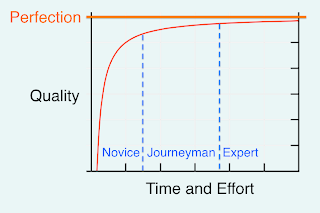 I suspect that John was influenced by one of Seth Godin’s blog posts that talked about effort but didn’t explicitly mention an asymptote. Previously I blogged about how the labeling he used for three stages of expertise in that one didn’t quite fit. Those stages can be added to the illustration as shown above. Seth’s point was that you should become an expert rather than stop at the middle, journeyman level.
Posted by Richard I. Garber at 11:42 AM

Thanks very much for the post and the links back to my site. Thanks also for using a much better graphic! I had looked for something like this but couldn't find it. If you don't mind, I'd like to pinch it and credit it back to you.

In fact, I mentioned the asymptote metaphor in a post that I wrote about the book a little over a year ago: http://wp.me/pwfa1-u7

I highly recommend the book.

Cheers and thanks again,