How many stages of speaker development are there? 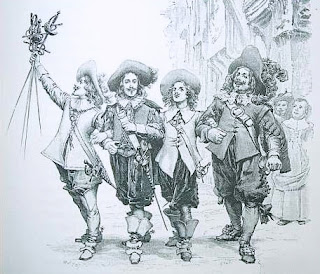 On February 5th Olivia Mitchell blogged about the first five stages of speaker development. She described them as being:

4. It’s all about the audience.

She suggested there might really be eight stages, but that she’d let us know when she got there. I was pleasantly surprised that she told a story about her personal progress. 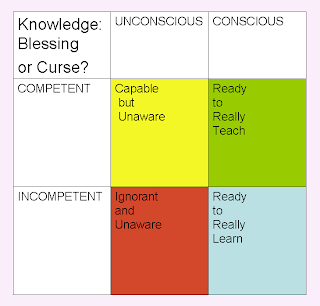 Typically people just drag out a 2 x 2 matrix and enumerate all four possibilities shown above, as I previously did in a post about knowledge and consciousness (and curses). The only real insight here is that there actually is a Stage Zero of unconscious incompetence (being both ignorant and unaware of it), which is what Donald Rumsfeld also has redundantly termed Unknown Unknowns. 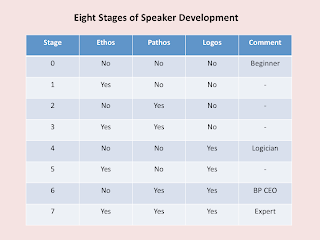 Even worse are the communications professors who can glibly dredge up Aristotle’s three-way classification of ethos, pathos, and logos as being the pillars of speaking and enumerate the eight stages shown above. They deserve to hear the following brief comic dialogue:

Student: "Great! I just love the Three Musketeers, or was that the Three Stooges?"

Olivia's graphic of a person first stuck inside a box (rather than standing on one) reminded me of the stunning video for the Tori Amos song Silent All These Years.

Great post, Richard. I also enjoyed Olivia Mitchell's insights. Not only that, but you introduced me to a new singer. I'd heard of Tori Amos, but I LOVED the video and her voice!
I would add to this that speakers may slip back a square or two if they don't keep speaking, learning and progressing. (Or teaching, as you're doing!)

I’m glad you enjoyed hearing Tori. In previous posts I’ve mentioned some other singer-songwriters like Peter Gabriel and Richard Thompson.

Josh Ritter is one of the younger ones to have come from Idaho, with songs like Come and Find Me and Long Shadows.