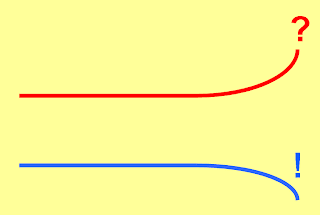 The 4th edition (2004) of the American Heritage Dictionary defines uptalk as:

“A manner of speaking in which declarative sentences are uttered with a rising intonation as though they were questions.”

That word was coined by James Gorman in a 1993 article in the New York Times. Uptalk is related to an earlier linguistic term, high rising terminal (HRT), although Mark Liberman pointed out that the detailed definition for that term likely is incorrect. Uptalk generally is dismissed as an affliction. For example, Diane Diresta said that:

“….This is a real credibility killer. Women will not be taken seriously with this vocal pattern. To speak with authority practice bringing the voice down at the end of a sentence. American intonation patterns use a downward inflection to declare or demand and a rising inflection to question or indicate uncertainty.”

Other speaking coaches like Lisa Braithwaite have expressed similar sentiments. In their book Essentials of Business Communication, Mary Ellen Guffey and Richard Almonte, (6th edition, 2009) say on page 297 that:

“Some speakers today are prone to ‘uptalk.’ This is a habit of using a rising inflection at the end of a sentence, resulting in a singsong pattern that makes statements sound like questions. Once used exclusively by teenagers, uptalk is increasingly found in the workplace, with negative results. When statements sound like questions, speakers seem weak and tentative. Their messages lack conviction and authority. On the job, managers afflicted by uptalk may have difficulty convincing staff members to follow directions because their voice inflection implies that other valid options are available. If you want to sound confident and competent, avoid uptalk.”

Uptalk serves some functions. One is to hold the floor and convey: “but wait, there’s more.” In a newspaper article Stephanie Marsh noted to the contrary that:

“New studies show that people who use uptalk are not insecure wallflowers but powerful speakers who like getting their own way: teachers, talk-show hosts, politicians and facetious shop assistants.”

How about a quantitative example? During a trial you might expect the highest-status judge would use almost no uptalk, the lawyers (prosecution and defense counsel) would use more, witnesses even more, and the low-status defendant the most. Is this how people behave? Bronwen Innes looked at the rates of uptalk (HRT) during the examination phases of the hearings for seven criminal jury trials held by the District Court in Auckland, New Zealand. Here are the uptalk rates she found: 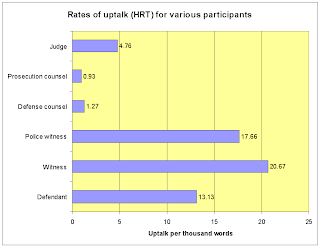 Note that witnesses used more uptalk than the defendant. Attorneys (prosecution and defense counsel) used the least uptalk, and the judge used it more than the attorneys. She concluded that:

“….although HRTs certainly have some association with power, it is more accurate to describe them in terms of discourse function, role, and goals than as a stable social attribute of speakers.”

Reality is more complicated than advice from speech coaches might lead you to believe.
Posted by Richard I. Garber at 10:16 AM

I love your ability to find interesting bits of research and present them to us here. Your blog is a treasure trove!

Thank you for your comment. By the way, you might be amused to hear that the fifth paragraph of Diane DiResta’s often reposted article Does Uptalk Make You Upchuck? begins with a rounded version of the Mehrabian Myth that: “According to one study, the voice is nearly 40% of the message.”

It's a very pervasive myth!