When does fear of public speaking start? 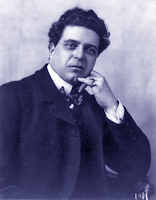 Psychologists and psychiatrists long have pondered the question of when (and how and why) the fear of public speaking begins. Coaches have claimed that fear begins way back in early childhood, based on experiences of rejection in school or by parents. Nancy Daniels told an anecdote about a psychiatrist named Frances (or Francis) who feared speaking based on an incident at age seven with her abusive father.

The latest report from a prolonged study of a group of  3021 young people finally provides a good answer to this question. It is a paper published last month by Knappe et al on "Social fears and social phobia types among community youth: differential clinical features and vulnerability factors." That paper, which I blogged about yesterday, includes a graph showing the cumulative distribution for “age of onset” of several fears, including the isolated fear of public speaking. I have replotted it below. 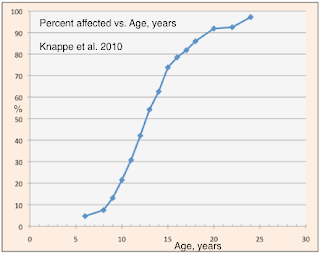 According to these results only about 5% of the people reported that the fear already had began by age 7. The mean age of onset (50%) was at about age 13. It was not until around age 20 that 90% percent had that fear. So, more typically a fear of public speaking rears its ugly head in early adolescence, but sometimes it does not show up until early adulthood.

The only other discussion about age of onset I could find was a 1996 paper by Stein, Walker, and Forde on "Public Speaking Fears in a Community Sample" (in Canada). They reported just three points rather than a curve: 50% at age 13, 75% at age 17, and 90% at age 20. Their results agree with those of Knappe et al.
Posted by Richard I. Garber at 5:53 AM

It's great to see a blog on fear to joy with public speaking because it's definitely something people fear but you feel a lot better and confident once you've over come your fear of speaking to a large audience.