Who invented the flip chart? 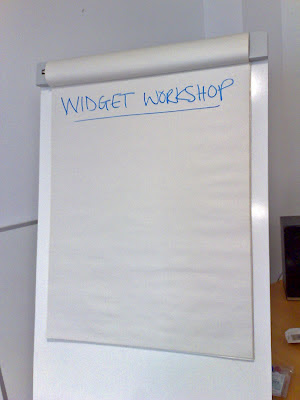 While researching yesterday’s post about flip charts I looked at the  en.Wikipedia page, which said that:

“The flip chart is thought to have been invented by Peter Kent who built one to help him in a presentation. He went on to found the visual communications group Nobo plc.”

Another web page suggested that Mr. Kent came up with the flip chart in the mid 1970’s. That sounded far too recent, so I looked further and found a Wikimedia Commons image of one being used by Boy Scout leaders a decade earlier in 1962.

Then I found a post by Gerhard Gschwandtner on his SellingPower Blog that claimed the flip chart had been used by John Henry Patterson (1844-1922) who ran the National Cash Register Company and also pioneered sales training. There is a single-page biography of Patterson (and the claim he invented the flip chart) on page 9 of the first chapter of a 2004 historical book called Home Field Advantage: A Century of Partnership Between Wright-Patterson Air Force Base and Dayton, Ohio in the Pursuit of Aeronautical Excellence.

Now I knew the flip chart went back to before 1922. But how far? I needed another way to access the power of knowledge. At the Boise Public Library I found another book from 2004 by Jeffrey Gitomer called The Patterson Principles of Selling. On page 53 there was a photograph from 1912 of Mr. Patterson addressing the 100 Point Club while standing next to a pair of flip charts on casters.

So, the flip chart is at least a century old (but newer than the blackboard), and it came from the same city as both the airplane and the automobile starter motor.

John Henry Patterson said about communication both that:

“To get your ideas across, use small words, big ideas and short sentences.

Before you try to convince anyone else be sure you are convinced, and if you cannot convince yourself, drop the subject.”

The flip chart image shown above came from Mr. William McInnes on flickr.
Posted by Richard I. Garber at 8:33 AM