PowerPoint Flaws and Failures: Do People Know and Understand What They’re Doing?

At PubMed Central I recently saw the full text to a 22-page article titled PowerPoint® Presentation Flaws and Failures: A Psychological Analysis that had appeared in July in Frontiers in Educational Psychology. That article was written by Stephen M. Kosslyn, Rogier A. Kievet, Alexandra G. Russell, and Jennifer M. Shephard.

It is of considerable interest because Stephen M. Kosslyn also has previously written a pair of books titled Clear and to the Point: 8 Psychological Principles for Compelling PowerPoint Presentations (2007), and Better PowerPoint: Quick Fixes Based on How Your Audience Thinks (2010). The article discusses three different studies.

In this post I will discuss the third one, which had 48 people (27 females and 21 males) look at sixty pairs of “ Do/Don’t” slides to identify which was the correct choice. 41 slides came right from Kosslyn’s 2007 book, and the others were added. Principles (and number of slide pairs covering them) were: 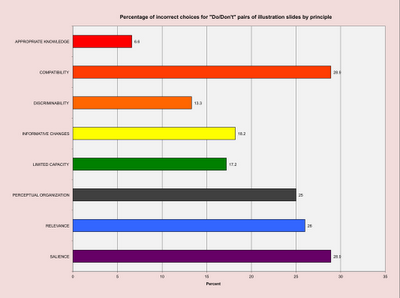 A bar chart shows the percent of incorrect choices made between the Do and Don’t slide pairs. (Click on the chart to see a larger, clearer version). The wrong choice was made on average 20.5% of the time (or one out of five times). Participants did best at identifying slides for the principle of Appropriate Knowledge (6.6% wrong), and worst for both Compatibility and Salience (28.9% wrong).

What is the chance that a presentation with ten slides will have all of them correct? It’s 0.795 raised to the tenth power, or 0.1008. So, there’s only a 10% chance of getting a completely correct one. 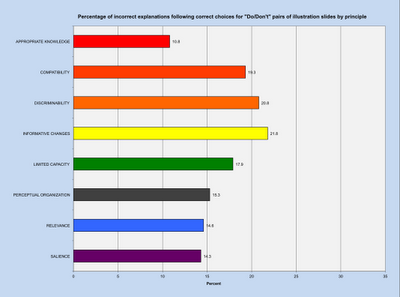 Another bar chart shows the percentage of correct choices where the explanation for that choice was wrong. The wrong explanation was made on average 16.8% of the time (or one out of six times). Participants did best at explaining slides for the principle of Appropriate Knowledge (10.8% wrong), and worst for Informative Changes (21.8% wrong).

This study showed that a significant minority of people do not really know (20.5%) or understand (16.8%) how to use PowerPoint effectively. Perhaps at work they just were handed a 10 Minute Guide, and turned loose to struggle with the software.
Posted by Richard I. Garber at 9:50 AM