Don’t end by driving your audience off a cliff 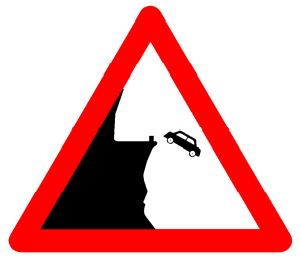 The Looney Tunes cartoon ending, with Porky Pig stuttering: “That’s all folks” is a horrible way to treat your audience. If you do that, they will feel let down - much like Wile E. Coyote going off a cliff in a Roadrunner cartoon.

On December 16 at our Capitol Club Toastmasters meeting I presented Concluding Your Speech. It was the last talk from the Better Speakers Series. The prepared text from Toastmasters International for the talk described six types of endings. I added an example for each one as follows:

1. Call for action. At the Brandenburg Gate in Berlin, back on June 12, 1987, President Ronald Reagen famously said: “Mr. Gorbachev, tear down this wall!”

2. Tell a story. It can be one of your own, someone else’s, or even a fairy tale. A small boy was crying. Although he was stretching as high as he could to reach a door bell, it was still just a few inches out of reach. An old man passing by took pity on him, and picked him up. After he rang the bell, the man put him down and asked “now what?” The boy said, “I don’t know about you mister, but I’m going to start running away - just as fast as I can.”

3. Use a quotation. Abraham Lincoln said that: “Nearly all men can stand adversity, but if you want to test a man’s character, give him power.”

4. Refer back to the beginning. Suppose that we started in Marion, Ohio. Most of the speeches for the 1920 presidential campaign that led to an election landslide were made from the front porch of Warren G. Harding’s home. He died before even completing one term. He and his wife Florence are buried in Marion, in a marble memorial just a few miles from his home. (The losing Democratic candidate for vice president was expected to get out of politics. He was Franklin Roosevelt!)

5. Ask a rhetorical question. Billy Corgan of the Smashing Pumpkins said: “If practice makes perfect, and no one’s perfect, then why practice?”

6. Repeat your main points. Suppose that you were trying to get funding for a five-year exploration mission, perhaps a trek to the stars. Near the end of your presentation to management you could get bogged down in details - like the budget for repair, replacement, and refurbishment of equipment in fiscal year number five. You need to go back and clearly state that what you really want to do is:
a) to explore strange new worlds
b) to seek out new life and new civilizations
c) to boldly go where no man has gone before.

I also discussed concluding or ending a speech in a previous post back in June 2008. There is a very detailed 16-page module by Warren Sandmann on Introductions and Conclusions in the ACA Open Knowledge Guide to Public Speaking.
Posted by Richard I. Garber at 11:51 AM