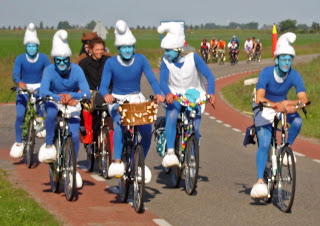 No, not the cute, little, blue, animated characters that Neil Patrick Harris dealt with in The Smurfs movie.

SMERF is an acronym used to describe a market segment of the meetings business that consists of Social, Military, Education, Religious, and Fraternal nonprofit groups. They’re price-sensitive and typically fill slow dates (possibly weekends) in the off season. Obviously they need lodging, food, and drinks. Less obviously they may need a speaker. If you want to get paid to speak, they are one place you could start.

A Toastmasters District Conference is one example of a SMERF meeting. The 2010 District 15 Spring Conference I attended in Boise began on Friday afternoon, and ended on Saturday night.

You can find out about SMERFs both in the quarterly SMERF Meetings Journal and the monthly Small Market Meetings. The February 2010 issue of the latter discussed how In rocky times the SMERF market remains reliable. They also had two articles about the military - Military reunions find many options, and Military reunions - all hands on deck. The SMERF Meetings Journal had articles about Choosing the right speaker and Motivational speakers who deliver for less. Similarly, on September 8th In his Overnight Sensation blog, James Feudo discussed How to Hire a Toastmaster for a Speech.

How else can you find out about this market near you? Contact Convention & Visitors Bureaus, hotels (ask for the SMERF Group Meetings Manager), and meetings planners. Be aware that some groups rotate meeting locations on a regular schedule, so where they were last year may not be where they will be next year. (The location for the Toastmasters District 15 Conference moved through their five Divisions, typically between Boise, Salt Lake City, and Pocatello or Idaho Falls).

The image of smurf cyclists came from Wikimedia.
Posted by Richard I. Garber at 8:29 AM