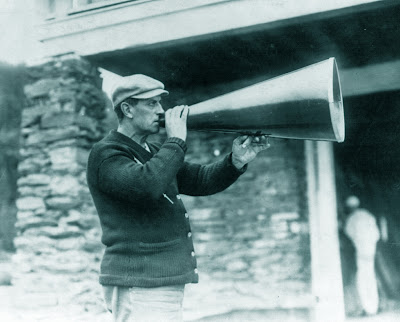 Yes! On November 2nd Drew Neisser blogged at Fast Company about Giving Kick-Ass Presentations in the Age of Social Media. His seven points were:

1. Don’t panic if they aren’t looking at you.

2. Stifle the temptation to ask for a device moratorium.

3. If you aren’t nervous, you should be now.

4. If you don’t speak Twitterese, it’s time to learn it.

5. Congratulations! You may be speaking to millions you can’t see.

7. When all else fails, surprise the audience with honesty.

Even before I read his #3, I was inclined to be nervous about something new. After all, Twitter is like giving a heckler a large, digital megaphone. Some people will use it to yell: HEY! LOOK AT ME!

So far I haven’t presented at a conference that displayed a Twitter backchannel. Long ago I used to follow two unmoderated Usenet Newsgroups - sci.materials and sci.engr.metallurgy. The majority of users posting and commenting were intelligent and quite civil, but there also were a few loudmouthed jerks and trolls. I'd expect the same from Twitter.

Imagine what Abe Lincoln might have put up with if Twitter was around during the Gettysburg Address:

Bruce63: Abe Lincoln once turned to somebody and said, do you ever find yourself talking with the dead?

I’ve seen several blog posts that have discussed living with the backchannel. Ellen Finkelstein recently blogged on how to harness the back channel during your presentations. Last year Denise Graveline blogged about integrating Twitter in your public speaking: 14 ways. Olivia Mitchell blogged about how to manage the Twitter backchannel, and also provided a detailed publication as a 62-page Acrobat file discussing How to present with Twitter (and other backchannels).

The image of a rowing coach with a megaphone is from here. That last Tweet is the opening line from Bruce Cockburn’s song Postcards from Cambodia.
Posted by Richard I. Garber at 10:43 AM