A narrated hike through the forest along Morris Creek 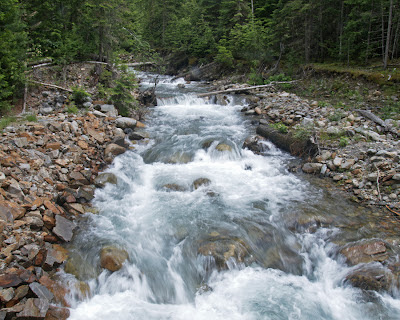 A month ago, on June 23rd, I went for an afternoon hike in the Scotchman Peaks roadless area northeast of Lake Pend Oreille. That’s way up in northern Idaho, not far south of the border with Canada and west of the Montana state line. About a dozen people followed a trail uphill along dry creek bed parallel to Morris Creek. The return was downhill along the same route.

It was part of the annual meeting for the Idaho Native Plant Society (INPS). The hike was led by  Derek Antonelli, who is president of the Calypso Chapter of INPS in Coeur d’ Alene. He works for the state Fish and Game department, and has edited materials for the Idaho Master Naturalist Program. Derek’s description for our route said that the vegetation would be a good representation of the native plants found in the moist Western Hemlock / Western Red Cedar forests of northern Idaho. When he’d hiked this trail last September, he’d counted over 100 different species of plants.

For me it was an eye opening presentation. He was surrounded by visual aids, presenting a topic he was passionate about as an extended conversation. In response to questions from the group Derek identified and discussed everything from little pipecleaner moss and oak fern to other large trees like Douglas Fir and Grand Fir. Depending on the amount of water, there’s a sequence of which trees predominate in western forests. I quickly lost track of the number of wildflowers, ferns, and mosses but came away with a sense of wonder.
Posted by Richard I. Garber at 7:34 AM