Isn’t it time to bury this joke? 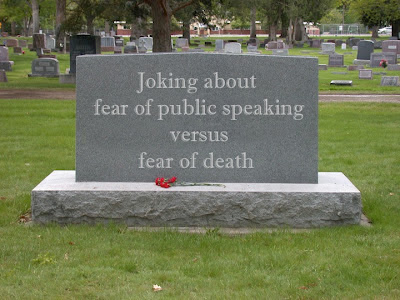 Two decades ago in a comedy routine Jerry Seinfeld joked that:

“According to most studies, people’s number-one fear is public speaking. Number two is death. ‘Death’ is number two! Now, this means to the average person, if you have to go to a funeral, you’re better off in the casket than doing the eulogy.”

After watching prolonged coverage of the massacre at a theater in Aurora, Colorado on Friday (and the anniversary of an even worse massacre in Norway) I’ve concluded that it’s time for speaking coaches and teachers to quit referring to this joke. What do you think?
Posted by Richard I. Garber at 4:30 PM