Another overview of Toastmasters International’s Pathways paths and projects 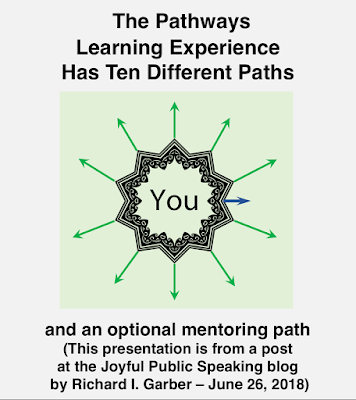 On June 18, 2018 Toastmasters International had a press release about its new Pathways educational program titled Toastmasters modernizes its educational program with Pathways. This is the first complete redesign. In my district (District 15) that program first was available on March 20, 2018. I’m still trying to make sense of and understand those ten different paths. There is an eleven-page.pdf file on Paths and Core Competencies which discusses each of them separately. There also is a Frequently Asked Questions (FAQ) web page. Most people take the online assessment, select a path, and go on. But what I wanted to know was an overall view to show me both how many projects there were, and how long the speeches in each were. So I rearranged that information, and looked elsewhere on a web page at the web site for district 73 to find the speech lengths. 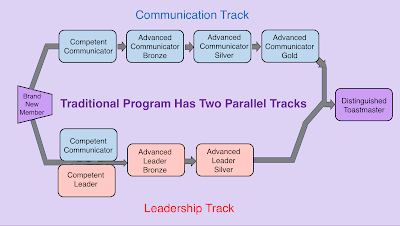 The previous ‘traditional’ program had two parallel tracks for leadership and communication, as shown above. (Click on that image to see a larger, clearer view). Contrast that with Pathways where they are integrated. 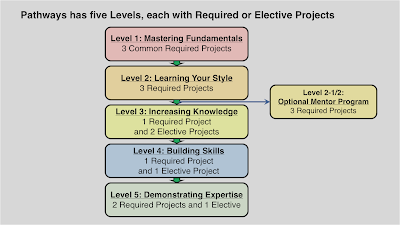 For Level [1] Mastering Fundamentals there are three required projects common to all ten paths: Ice Breaker, Evaluation and Feedback, and Researching and Presenting. 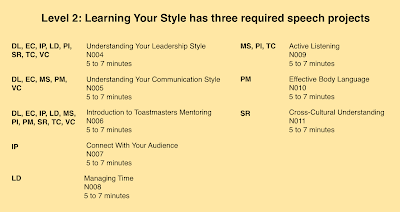 For Level [2] Learning Your Style there also are three required projects, but they are not common to all ten paths.

There is an optional Mentoring path with three more projects. It follows the Level 2 project, Introduction to Toastmasters Mentoring. So, as shown above, I will refer to it as Level 2-1/2 (in analogy to the 7-1/2th floor in the 1999 movie Being John Malkovitch. You can find descriptions for those other three projects, Prepare to Mentor, Mentoring, and Advanced Mentoring at district web sites (such as District 1). There is a Pathways infographic showing Mentoring along with the other paths.