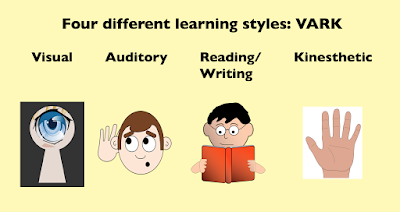 At The Atlantic web site on April 11, 2018 there was an article by Olga Khazan titled The Myth of ‘Learning Styles,’ subtitled a popular theory that some people learn better visually our aurally keeps getting debunked.

At the Scientific American web site on May 29, 2018 there was another article by psychology professor Cindi May titled The Problem with “Learning Styles. She discussed a recent magazine article by Polly R. Husmann and Valerie Dean O’Loughlin that was in Anatomical Sciences Education magazine titled Another nail in the coffin for learning styles? Disparities among undergraduate anatomy students’ study strategies, class performance, and reported VARK learning styles. You can read the abstract at PubMed. They found that:

Nick Morgan briefly discussed learning styles in a November 18, 2014 post on his Public Words blog titled Some myths of neuroscience and public speaking. He said:

“So let go of the idea that you’re required, as a good speaker, to sing to the auditory learners, put up slides for the visual learners, and dance for the kinesthetic learners. That’s bad pedagogy based on bad science.”


But you can’t expect people to learn how to do a dance like ‘The Bird’ from an 8-minute audio recording, like that by Morris Day and The Time. Instead you need to watch their 4-minute YouTube video.