Don’t annoy us by reading your PowerPoint slides 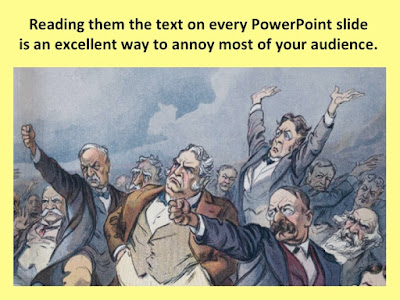 If you use your PowerPoint slides just as on-screen notes for a presentation, then you will irritate the audience because they always can read faster than you can talk. You also might turn your back and lose eye contact with them. 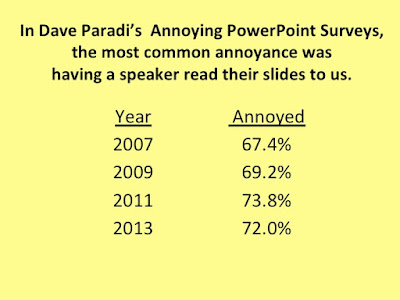 Dave Paradi did six Annoying PowerPoint Surveys. The most common annoyance was speakers reading their slides. For his 2007, 2009, 2011, and 2013 surveys  ~2/3 to ~3/4 of participants were annoyed, as shown above. I have previously blogged about PowerPoint Flaws and Failures: Survey of Common Flaws and Annoyances. A long magazine article from 2012 I discussed also surveyed what annoyed audiences. It found that presenters reading their slides was the third most common flaw, but the second most annoying one.

By using the Presenter View a speaker can instead paraphrase that text and put it in notes that only he can see. But. if he has properly rehearsed he won’t need to look at them.

This post was inspired by a recent infographic from SlideGenius that only mentioned Dave Paradi's 2013 survey.

The image was adapted from a 1908 Puck magazine cartoon about If Moses came down today found at the Library of Congress.