Playing Whack-A-Vole with a misattributed and bogus statistic 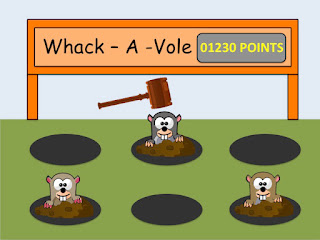 On March 30th I blogged about Floating fear statistics with no visible support and lamented that vague claims based on a silly web page at Statistic Brain keep popping up. It’s like playing a game of Whack A Vole, where just as you hit one pesky rodent on the head another two pop up.

On May 4th at Inc.com Jack Mize spread it it again in an article titled 5 Steps to Getting Your Way onto the Speaking Circuit. He said that:

“....according to data from the National Institute of Mental Health, 74 percent of all Americans have some measure of fear when it comes to public speaking. “

Quoting a statistic that you have not followed back to its source actually is a pretty good way to get chased off of the speaking circuit for doing superficial research.

But, that mythical 74% also showed up in May 26th article titled Chair City Toastmasters sharpen communication skills by Debbie Hightower at tvilletimes.com which claimed:

“According to the National Institute of Mental Health, as many as 74 percent of people suffer from some form of speech anxiety.”

Sometimes I have been successful by commenting, like when Dawn Mentzer mentioned it in a March 31st blog post on Ways to Overcome Your Fear of Public Speaking.