Fears of university or church leaders, the paranormal, and the 2018 Chapman Survey of American Fears 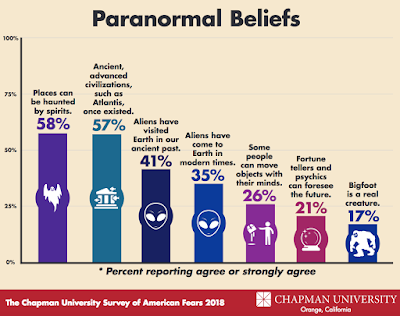 On October 16, 2018 there was a blog post from Chapman University titled Paranormal America 2018 that discussed some questions from the fifth (2018) Chapman Survey of American Fears. It contained the vertical bar chart shown above which listed seven paranormal fears (ranked by the percent who Strongly Agreed or Agreed, and rounded to the nearest percent). The following text claimed:

“Currently the most common paranormal belief in the United States is that places can be haunted by spirits (57.7%), followed closely by the belief that ancient, advanced civilizations, such as Atlantis once existed (56.9%). More than two out of five Americans (41.4%) believe that that aliens visited Earth in our ancient past and more than a third believe aliens are visiting now (35.1%). Of the items we asked about, Americans are the most skeptical about fortune tellers, with only approximately 17.2% believing that others can see the future.” 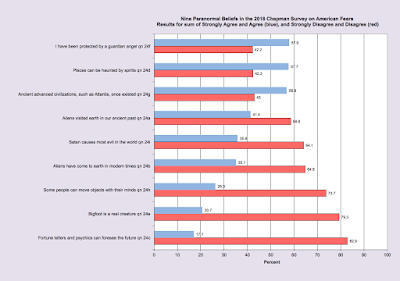 But there is a bigger problem. I looked at the web page for the survey, and downloaded the .pdf file with the Full Survey and Methodology. On pages 67 to 69 there are really are nine questions, qn 24a through qn 24i. As shown above in a horizontal bar chart the most common paranormal belief (57.9%) actually is that ‘I have been protected by a guardian angel.’ The other omitted belief (35.8%) is that ‘Satan causes most evil in the world.’ Both beliefs were also asked about in 2016, but not reported on in their blog post. On October 16, 2016 I blogged about how Guardian Angels and Satan are paranormal beliers the 2016 Chapman Survey of American Fears wouldn’t touch with a ten-foot pole. My suspicion was this was due to fears of upsetting university or church leaders. Last year they omitted the question about Satan. On November 24, 2017 I blogged about how Guardian Angels are a belief that the 2017 Chapman Survey of American Fears blog post on Paranormal America wouldn’t touch with a ten foot pole. They still have that ten-foot pole!