How many floors does this motel have? 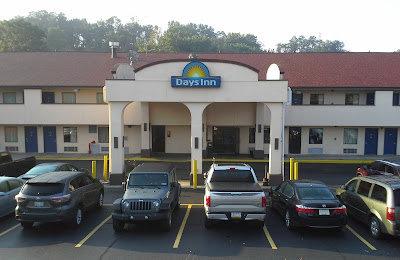 Your first impression would be just two, and wrong. But suppose I told you that this Days Inn is located on Mosside Boulevard in Monroeville, Pennsylvania - ten miles east of Pittsburgh. I was in Pittsburgh last Saturday for my fiftieth high school reunion (which I will discuss in another post). 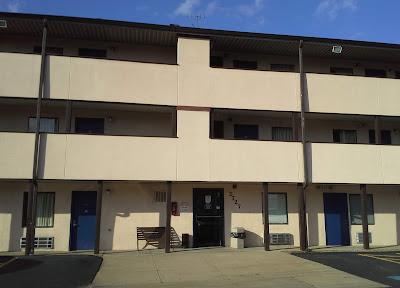 Western Pennsylvania is quite hilly. When you instead look at the downhill side, you can see there are really are three floors. 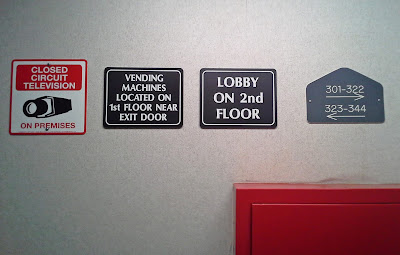 Signs in the hall outside the elevator remind you that the lobby is on the second floor. We stayed in Room 333. Two of my friends at the reunion stayed at another motel in Monroeville - where the lobby was on the third floor. 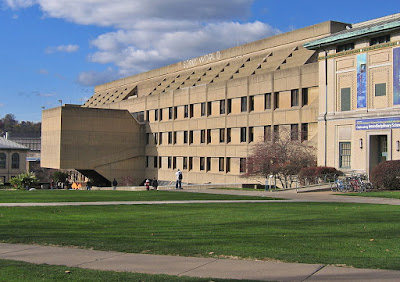 A more extreme example of Pittsburgh architecture is the brutalist, concrete, eight-story Wean Hall at Carnegie Mellon University. The protruding ‘turtle head’ auditorium is Room 7500. At the right is the rear entrance for Doherty Hall, which is on the main quadrangle, and almost at the same level as the sixth floor for Wean Hall. The foundation for Wean Hall is at the bottom of Panther Hollow. Building it in 1971 at this steeply sloped location cost fifty percent more per square foot than if it had been on a level site.

The image of Wean Hall came from Wikimedia Commons.