Advantages and disadvantages of speaking ‘in the round’ 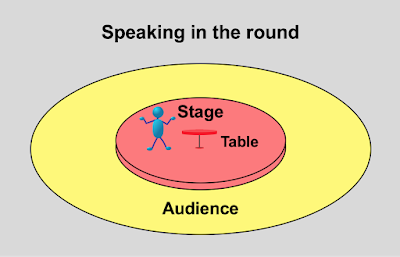 At Medium on September 26, 2018 there was an article by Andy Nulman with the confusing title of Don’t Fear the Sphere and a clearer subtitle of How to speak in the round without going around in circles. A typical ‘in the round’ layout is shown above.

I found three other articles about speaking in the round. On October 16, 2015 Victoria Tomlinson of Northern Lights PR described her 9 tips for presentations ‘in the round.’ On February 18, 2016 at LinkedIn Pulse Adrian Kirk discussed Speaking in the Round – how to master the trickiest of public speaking platforms. Kristin Arnold at Powerful Panels also had three articles on Theater-in-the-Round: Speaking and Presenting Effectively. Think carefully about the following ten points before you attempt this difficult layout:

1]  What are the advantages? First, there is a shorter distance between speaker and audience than for a typical room layout, with all the audience on one side. Second, that closeness make the presentation more conversational.


2]  What are the biggest disadvantages? Half the audience can’t see your face or frontal hand gestures.


3]  Should I try to spin around? No. Unless you are either a gymnast or a skater, you just will get dizzy and fall down, and look foolish.

4]  Should I plan to walk around the stage? Yes, Adrian Kirk has discussed three possible patterns (shown above).


5]  Does this round stage make my butt look big? It sure does. Get over it!


6]  Should I wear a basic black dress or a charcoal suit? Heck no! Don’t dress like a ninja - you just will blend into a dark background.


7]  Will I have a lectern to put notes on? Probably not, but you may have a small round table at the center of the stage. 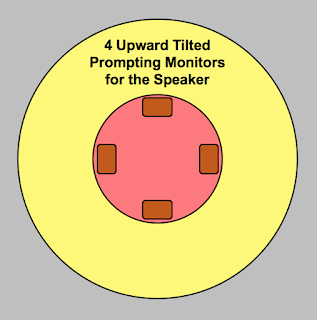 8]  Will I have prompting or confidence monitors? Maybe - they probably will be at the edges of the stage, as shown above. 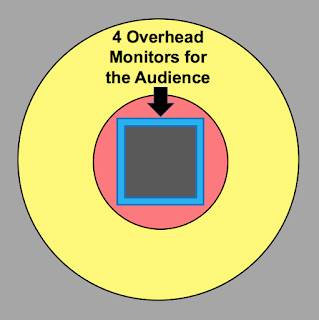 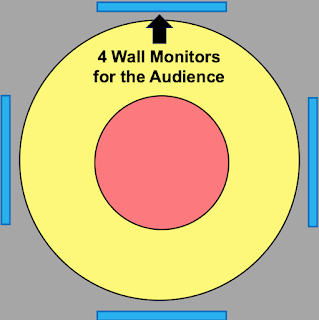 9]  Will there be screens for viewing video or PowerPoint? Maybe, either in a square cluster above the stage or up on the four side walls, as is shown above. 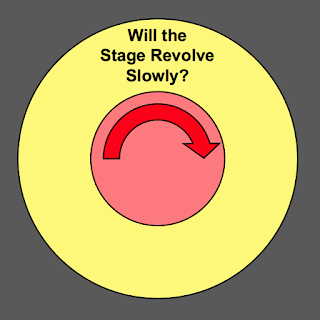 10]  Will the stage revolve slowly, like the restaurants at the Space Needle or Tower of the Americas? Perhaps. Be sure to ask beforehand.